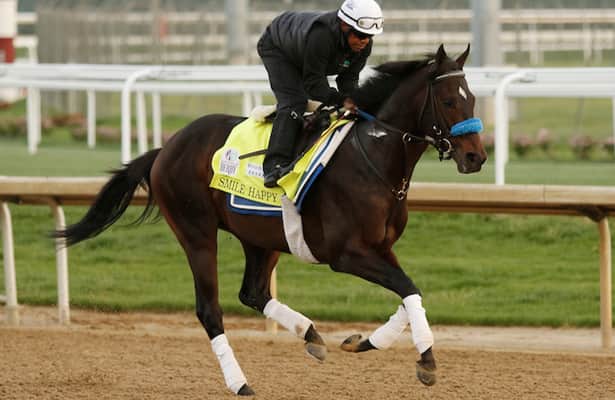 Trainer Kenny McPeek said Smile Happy will not be entered in the Preakness Stakes but that Kentucky Derby day allowance winner Creative Minister is a go for the Triple Crown's second jewel at Pimlico at May 21.

Regarding Smile Happy, McPeek said he would "probably back off a little bit and go from there."

Creative Minister is not nominated to the Triple Crown, so his connections will need to pay a $150,000 supplement to compete in the Preakness. He is owned by Fern Circle Stables and Back Racing.

By Creative Cause, Creative Minister won a 1 1/16-mile allowance race on Derby day at Churchill Downs by 2 3/4 lengths. The effort earned 92 Beyer Speed Figure, according to the Daily Racing Form.

"Coming out of the allowance race on Derby Day, he ran a pretty good speed figure," McPeek said.

Brian Hernandez Jr., who rode Creative Minister in each of his starts, will have the mount again, McPeek said.

Also under consideration for the Preakness is Rattle N Roll, who was sixth in the Blue Grass (G1) most recently. "We won't make a decision until this weekend," McPeek said.