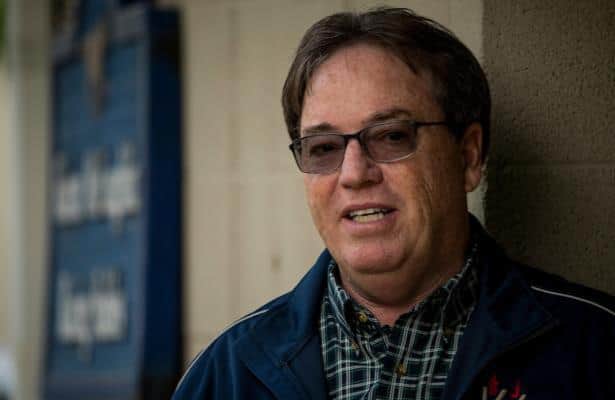 McLaughlin cited his recent run ins with the Department of Labor, both the New York and federal branches, as well as "a great offer" to take Saez's book as his current agent, Richie DePass, retires. Daily Racing Form's David Grening was first to report McLaughlin's move.

A 59-year-old from Lexington, Ky., McLaughlin has traveled the world as a conditioner, working for the royal family in Dubai and more recently basing in New York and Florida. His resume includes a Horse of the Year winner, 2006's Invasor, along with victories in races such as the Belmont Stakes and Dubai World Cup.

"I spoke to my wife and kids and brother and sisters and everyone in my family about it," McLaughlin said. "I’m honored to be able to take Luis Saez. It was a tough decision because I train for some great people — the Maktoum family for 26 years.

"It was very hard to leave them. Every trainer in the world would like to train for them. It wasn’t an easy decision, but it’s the best at this time with all the regulations and what I’ve been through with the Department of Labor.”

McLaughlin, who was investigated last year and fined along with a handful of other trainers in New York for minimum wage violations, pondered moving his operation Kentucky, not back to New York, when the weather warmed. Instead, it will be just McLaughlin going to book mounts for Saez at Keeneland.

"I get to stay in the game I love," McLaughlin said, "but just in a different capacity."

.@Gabby_Gaudet_ caught up with @luissaezpty about his agent Richard DePass retiring after the meet @GulfstreamPark and Kiaran McLaughlin ( @KPMRacingStable) taking his book at the start of the Keeneland meet. pic.twitter.com/SuXQRhEsgM

McLaughlin has worked previously as a jockey agent for the late Chris Antley before beginning his stable. A noted product of the D. Wayne Lukas training tree, he plans to travel beyond the Keeneland meet to New York and back to Florida next winter with Saez.

McLaughlin has been slowed, but certainly not stopped, by a 1998 diagnosis of multiple sclerosis. Three times Dubai's leading trainer, McLaughlin returned to the United States in 2005.

Along with Invasor, prominent horses from his barn included Grade 1 winners such as Frosted (Pennsylvania Derby, Met Mile); Alpha (Travers, Woodward); and Tamarkuz (Breeders' Cup Dirt Mile) in addition to the Belmont winner Jazil and Invasor, who won the Dubai World Cup.

McLaughlin seemed final in his decision Wednesday but didn't completely rule out a return to training later, saying, "You never know." He said it's too soon to know where his current trainees will relocate.

McLaughlin is gearing up for a big weekend, sending Endorsed to compete in the Santa Anita Handicap (G1) and promising maiden winner Spa City in the Tampa Bay Derby (G2). He expects to transition to agent on April 1.