Smith back aboard McKinzie for Santa Anita's Triple Bend 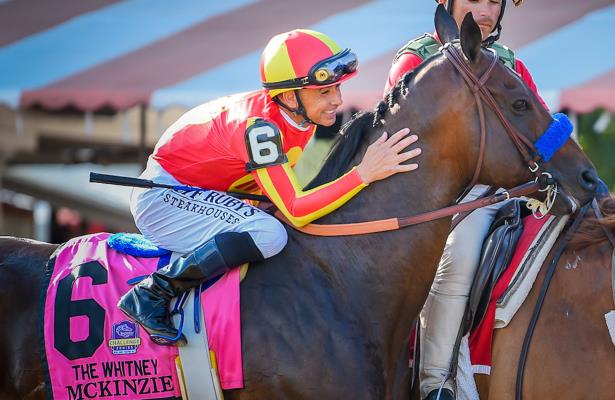 A three-time Grade 1 winner, McKinzie hasn’t sprinted since winning the Malibu Stakes (G1) locally nine starts back on Dec. 26, 2018. And for the first time since before the 2019 Breeders' Cup, the son of Street Sense will have Hall of Fame jockey Mike Smith back in the irons this weekend.

The Triple Bend, to be run for the 69th time, has attracted a strong group of five horses 3 and up, including John Sadler’s Flagstaff, a Grade 2 winner two starts back; trainer Dean Pedersen’s streaking California-bred Fashionably Fast, who tries graded stakes company for the first time as he bids for his seventh consecutive win; and Baffert’s Ax Man, who will likely scratch out of Saturday’s Grade 1 Hollywood Gold Cup to run on Sunday.

Beaten 28 lengths in the $20 million Saudi Cup, this highly accomplished 5-year-old son returns to his home court and a distance over which he's 2-for-2. A first-out maiden winner going seven furlongs on Oct. 28, his only other sprint resulted in a 4 ¾-length victory in the Malibu on opening day, 2018. Second two starts back as the 5-2 favorite in the Breeders’ Cup, McKinzie has an incredible resume that has produced earnings of $3,318,560 from an overall mark of 15: 7-6-0.

A lightly raced 6-year-old gelding by Speightstown, Flagstaff was unlucky to lose his most-recent start, finishing a fast-closing second in the Grade 3 Count Fleet Sprint Handicap on April 18 at Oaklawn Park. Away slowly, Flagstaff was last in a field of 11 after the first half mile and was extremely wide turning for home in a big effort at six furlongs.

Unbeaten in his two career starts at seven panels, winning the Grade 2 San Carlos Stakes two starts back on March 7 and the ungraded Damascus four races back on Nov. 2, Flagstaff has outstanding recent form in his corner as he seeks his sixth win from 13 overall starts.

A winner of six races in a row, the last four in state-bred stakes, this 5-year-old California-bred gelding by Lucky Pulpit pressed the pace en route to a half-length score in the one-mile Tiznow Stakes locally on March 1 and will shorten up to a distance at which he’s one for two.

A 2 ½-length winner of his lone start against open company, a 6 ½-furlong allowance five starts back on Aug. 24 at Del Mar, Fashionably Fast is a sharp horse facing much tougher competition. With an overall mark of 16: 7-3-2, he’ll be facing the toughest assignment of his career with regular rider Tiago Pereira up.

A gutsy winner of a one-mile classified allowance here on May 16, Ax Man defeated 2019's Grade 3 Longacres Mile winner Law Abidin Citizen by a head after matching strides for the early lead  Considered a top prospect early in his career, he was well beaten as the odds-on favorite in an important Triple Crown prep, the Grade 2 San Vicente Stakes, in just his second start on Feb. 10, 2018. Winless in five graded stakes attempts, this homebred 5-year-old gelding by Misremembered is 11: 5-0-3 overall.

The Triple Bend goes as the eight race on a nine-race program. Approximate post time is 7 p.m. ET.

The field in post position order with jockey and weight assignment: