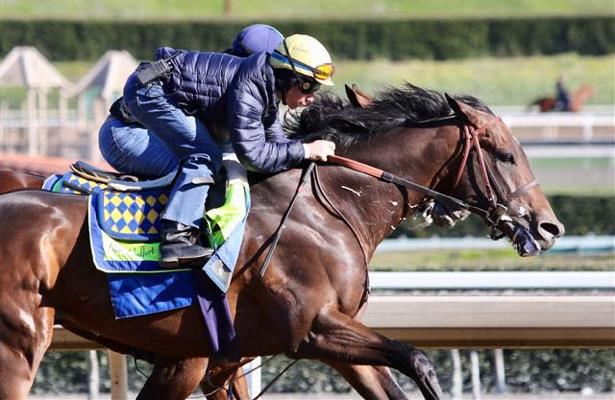 Post positions were drawn and fields were set Sunday for three stakes on an 11-race card at Del Mar next Saturday.

The most surprising, and biggest development, was the entry of multiple graded stakes-winning McKinzie in the Grade 1, $250,000 Bing Crosby Stakes, a 6-furlong main track run that often determines the top sprinter of the meeting.

Trainer Bob Baffert watched McKinzie zip through a 5-furlong work in 1:00.80 Sunday morning before entering the 5-year-old son of Street Sense, a winner of seven graded stakes and more than $3.4 million, in the Crosby.

McKinzie, with graded stakes wins from 7 furlongs to 1 1/8 miles on his record, will be tasked at the shortest distance of his career. Owned by Karl Watson, Mike Pegram and Paul Weitman and named for the late racing executive Brad McKinzie, the bay horse won his racing debut at seven furlongs at Los Alamitos on October 28, 2017.

McKinzie notched a Grade 1 score at the same distance in the Malibu at Santa Anita on December 26, 2018 and a Grade 2 in the 7-furlong Triple Bend there in June.

Baffert doesn’t expect cutting back by an eighth of a mile would be a problem.

“He’s got speed. All good horses have speed,” Baffert said. “The only good horse of mine that couldn’t run short was Real Quiet.” Real Quiet overcame his “shortcomings” by winning the Kentucky Derby, Preakness and very nearly the Belmont Stakes.

Other notable entrants in the field of 10 include Lexitonian, who will ship east after being scratched at the gate from Saturday's Alfred G. Vanderbilt (G1) at Saratoga; and Collusion Illusion, who has won 4-of-5 starts for trainer Mark Glatt including the June 20 Lazaro Barrera (G3) at Santa Anita Park.