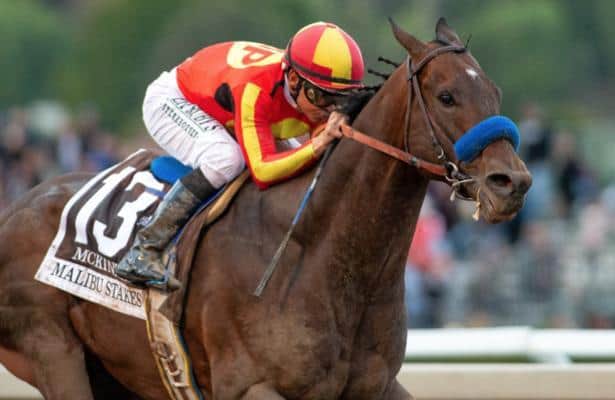 McKinzie made his Breeders’ Cup Classic flop seem like a distant memory Wednesday, finishing up in style to win the Grade 1, $300,000 Malibu Stakes at Santa Anita Park.

On the cutback to seven furlongs, the colt rallied from deep in the pack, then showed a superior turn of foot by blasting past his rivals in the stretch. They finished in a blanket 4 3/4 lengths behind the multiple Grade 1 winner trained by Bob Baffert and ridden by Mike Smith.

"I was just hoping he'd have that kick," said Baffert, who saddled four of 14 runners in the Malibu. "I was actually watching my other horses run. I was watching on the TV, and I said, 'He'd better be coming into the shot soon, or things aren't looking well."

It all worked out, and certainly, this win gives connections options with the Pegasus World Cup (G1) and Dubai World Cup (G1) coming on the calendar. Baffert has won both of those lucrative races and has a fresh horse in McKinzie, who missed the Triple Crown series due to a minor injury but has come back to also win the Pennsylvania Derby (G1).

"We're with Baffert. There's no plan with Baffert," said Mike Pegram, who campaigns McKinzie along with Karl Watson and Paul Weitman, looking ahead. "It never changes. The one thing about it is, I've got the greatest two partners in the world, and we've got a horse that can run. Whatever Bobby wants to do with him, I'm sure my partners will be good with."

Behind McKinzie, Identitypolitics won a photo for second. Still Having Fun was third and Axelrod fourth in a full field of 3-year-olds running in the year’s final top-level race restricted to sophomores.

The only concern from the McKinzie camp was a bit of a stumble leaving the gate, which positioned the son of Street Sense back in traffic.

“If you were going to get beat in the Classic, you were betting off running like that so you didn’t take too much out of yourself," Smith said. "Bob got him back here, gave him a little break. His energy level came back up. His weight came back up, and he was ready to run today. He was loaded from the word go.”

Off Wednesday as a 6-5 favorite, McKinzie has now hit the wire in front in all four starts at Santa Anita, where back in March he was disqualified from one of those victories in the San Felipe (G2). That and a 12th-place effort are the only blemishes on an otherwise perfect resume for McKinzie through seven career starts.

"I was bringing him back off that hard race off the layoff," Baffert said of the Classic. "He got real light. But you know what, the Breeders' Cup is a lot of money -- lot of excitement. You don't want to miss out on it. He just wasn't the same horse. Mike came back and said he was empty early. I just said, 'That's my fault, Mike.'

"We had him ready for this one."