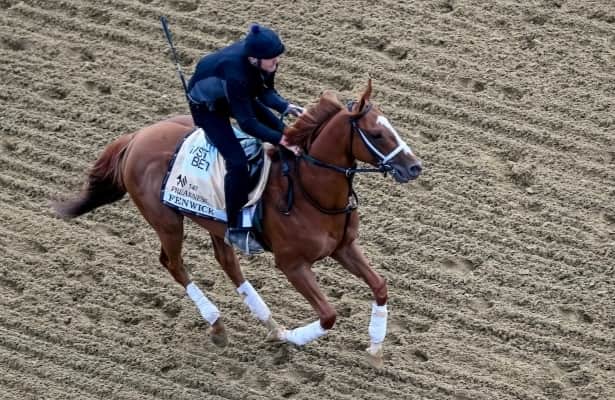 Asmussen was referring to the trainer of Rich Strike, who rocked the racing world by winning the Kentucky Derby at the staggering odds of 80-1. McKathan hopes to follow that same improbable path with Fenwick, listed at 50-1 in the Preakness morning line and sure to start as the longest shot on the board.

Fenwick, 1 for 6 in his career, is as perplexing as 3-year-olds come. He has the pedigree to produce another shocking result in the middle leg of the Triple Crown as a son of 2007 Preakness winner Curlin, a two-time Horse of the Year. And Fenwick looks the part.

“If we brought all of these horses out on a shank, you wouldn’t ask why we’re here. You would know,” McKathan said. “He’s a big fancy, fancy boy. I’ll stand him up against anyone here.”

Then again, racing history is filled with flops that had bloodlines and good looks on their side – and couldn’t run a lick.

It would be unfair to put Fenwick in that category. He displayed ability when he led at every call and dispatched maiden special weight company by 5 1/4 lengths on March 12 at Tampa Bay Downs with Paco Lopez aboard. Runner-up Commandperformance had placed second to stellar Jack Christopher in the Champagne and fourth in the Breeders’ Cup Juvenile.

Through his first four career starts, however, Fenwick was a mystery that even Asmussen could not solve. An auspicious second-place finish at seven furlongs in his debut on Oct. 17 at Belmont Park was followed by a sixth-place result at Aqueduct, a fifth at Fair Grounds and a sixth on Feb. 13 at Fair Grounds, dusted by 24 3/4 lengths.

The connections were so encouraged by the seeming breakthrough in the Tampa Bay race that they chased Kentucky Derby qualifying points in the April 9 Blue Grass Stakes at Keeneland. After Lopez worked to have him forwardly placed, he beat a steady retreat in crossing the wire last of 11. He trailed victorious Zandon, who would go on to be third in the Kentucky Derby, by a whopping 36 lengths.

Two mundane works since the Blue Grass hardly suggest the light has gone on. And yet McKathan, when asked if he can possibly win, replied, “I definitely think I can or I wouldn’t be here.”

He added, “This horse just keeps getting bigger, stronger. He’s going to find his running style. If it goes his way, they’ll be talking about him.”

Although great skepticism surrounds Fenwick, no one would ever question McKathan’s ability to assess a horse. He and his late brother, J.B., established McKathan Bros., a renowned training and sales operation, in Ocala in 1989. They played integral roles in the development of Derby and Preakness winners Silver Charm and Real Quiet and 2015 Triple Crown champion American Pharoah, among many equine stars.

With the sudden loss of J.B. to an apparent heart attack on Feb. 3, 2019 at age 53, McKathan finds himself doing the work of two men. “Everything we did, we did together,” he said. “I think it spreads me a little thinner without him for sure.”

He continues to apply the lessons taught to them by their father, Luke, who died on Feb. 14 at age 89. He remains committed to McKathan Bros., grateful for a staff that does everything it can to compensate for J.B.’s huge loss.

“I buy and sell babies. I break and train babies for a lot of people,” McKathan said. “That’s not going to change.”

There are times, though, when his brother’s death strikes him particularly hard. As he readies Fenwick for the Preakness, this is one of those times.

“I miss my brother and I’d love for him to be here,” he said wistfully.