McGaughey to 'wait and see' on Code of Honor after Kelso 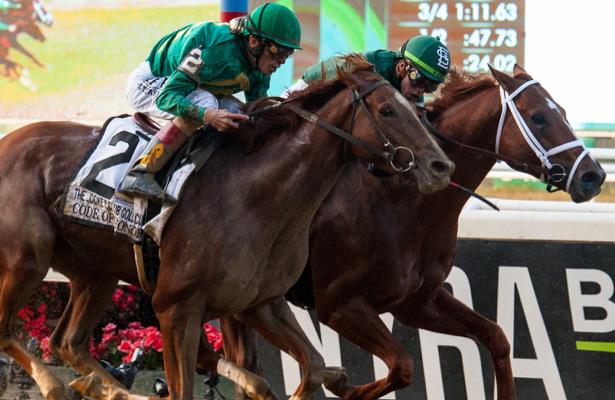 But that doesn't mean he'll rush his strongest prospect, Code of Honor, to the Nov. 7 race at Keeneland.

First, there's the Grade 2 Kelso at Belmont Park on Oct. 3.

The Breeders' Cup Classic "would be a nice thought, but we’ll have to wait and see how we do on the third, kind of evaluate what we want to do," McGaughey said. "Hopefully, he’ll run really well, and that would be the next start. But we just have to wait and see.”

The 4-year-old Noble Mission colt, a William Farish homebred and runner-up in last year's Kentucky Derby, started his 2020 campaign with a score in the June 6 Westchester (G3) at Belmont after a seven-month layoff. He then finished third in the Met Mile (G1) and fourth in the Whitney (G1) on Aug. 1.

Since then, McGaughey said, “he’s doing good. I backed off of him, and I just said we’re going to start over again with him. And he had a really good work yesterday with Javier Castellano, who’s going to ride him because Johnny (Velazquez) is at the Preakness. But he was very pleased with the work, as I was, and we’ll just go from there.”

McGaughey also is taking a wait-and-see approach with Performer, the 4-year-old son of Speightstown who has yet to start this year after going four-for-four in 2019.

The Phipps Stable homebred trained through the spring, then took a couple of months off before resuming workouts in late August. His most recent work was four furlongs in 48.23 at Belmont, the sixth-fastest of 69 at the distance.

“Well, I’m going to pretty much just let him tell me," McGaughey said. "But he had a really good work here the other day. I’d like to find an allowance race for him. He hasn’t run in close to a year. Try to give him a chance without overdoing it, and then let him take us from there also.”