McGaughey: Greatest Honour a go for Fountain of Youth 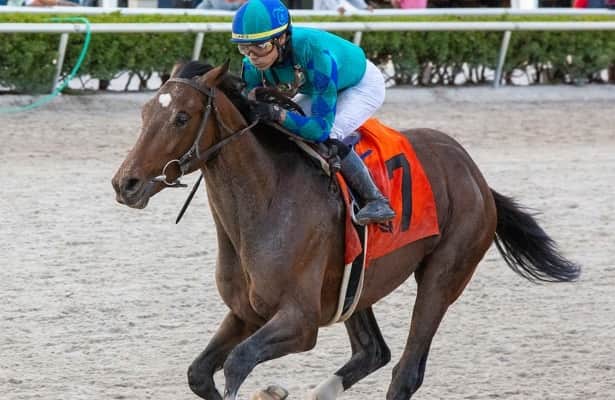 Courtlandt Farms’ Greatest Honour, who established himself as a prime 2021 Triple Crown prospect with a powerful victory in the Jan. 30 Holy Bull (G3), is scheduled to return in the $300,000 Fountain of Youth (G2) Feb. 27 at Gulfstream Park.

The Shug McGaughey-trained son of Tapit is prominent on the list of 36 nominations for the 1 1/16-mile major prep for the $750,000 Curlin Florida Derby (G1) presented by Hill ‘n Dale at Xalapa March 28 at Gulfstream Park.

Greatest Honour, who broke his maiden in his fourth career start Dec. 26 at Gulfstream, rallied from seventh in a field of nine to draw away by 5 ¾ lengths under Jose Ortiz in the 1 1/16-mile Holy Bull.

“I had a lot of confidence that he’d run well, but I didn’t know what that meant. I maybe was a little surprised how well he ran and how much he dominated those horses,” his Hall of Fame trainer said. “I was very pleased and pleased the way he came out of it.”

Courtlandt Farms’ homebred colt launched his career with a pair of strong closing third-place finishes in maiden special weight sprints at Saratoga and Belmont before losing a photo finish in his first trip around two turns at Aqueduct and completing his juvenile season with his 1 1/16-mile maiden breaker at Gulfstream.

“Two turns is a big help. All of his races around two turns have been good,” McGaughey said. “I think he’ll run as far as a horse wants to run.”

McGaughey, nevertheless, was impressed with how quickly he came to hand upon joining his stable last year.

“One of the things about him is that he’s a big colt with a distance pedigree, so for him to get to the races at Saratoga shows what an athletic-type horse he is,” McGaughey said. “That’s a big feather in his cap. One of the things that impresses me is when I saw him in March at Courtlandt Farms and if you told me that he was going to run right off the bat at Saratoga, he didn’t give me that impression. He looked more like a late-fall horse.”

Not that getting Greatest Honour to the races came without challenges.

“He’s no pushover by any means. He had some things about him in his training that we had to get out of him. Being by Tapit, they can be a little difficult at times and he wasn’t an exception to that rule,” McGaughey said. “But once we got him going in a forward position, he’s taken everything really well. It’s interesting how well he acts on race day and in the paddock and those types of things.”

McGaughey is hoping that Greatest Honour will follow in the hoofprints of Orb, whom he saddled for victories in the Fountain of Youth, Florida Derby and Kentucky Derby (G1) in 2013.

Three Diamonds Farms’ Fire At Will is among the most accomplished Fountain of Youth nominees, having captured the Nov. 6 Breeders’ Cup Juvenile Turf (G1) at Keeneland in his most recent start. The Mike Maker-trained son of Declaration of War also captured the Pilgrim (G2) on turf at Belmont but broke his maiden in the off-the-turf With Anticipation at Saratoga in his second career start. Fire At Will is scheduled to make his second career start on dirt in the Fountain of Youth.

Godolphin LLC has a pair of nominees for the Fountain of Youth – Brad Cox-trained Essential Quality, last year’s 2-year-old champion who is not scheduled to run, and Brendan Walsh-trained Prevalence, a dazzling 8 ½-length debut winner at Gulfstream who being considered for a return in the 75th running of the race.

Rodolphe Brisset-trained Tarantino, pressed the pace before finishing second in his first start on dirt. The son of Pioneerof the Nile finished 3 ¾ lengths ahead of Todd Pletcher-trained Prime Factor who raced evenly to finish third in his first start since capturing his debut by 8 ¾ lengths at Gulfstream Dec. 12.

Slam Dunk Racing, Madaket Stables LLC and partners’ Drain the Clock, who is coming off a 6 ¼-length victory in the Swale (G3) and a 7 ½-length score in the Limehouse at Gulfstream for trainer Saffie Joseph Jr. is likely to return in either the Fountain of Youth or Gotham at Aqueduct.