McGaughey: First Captain will 'have to step up' in Curlin 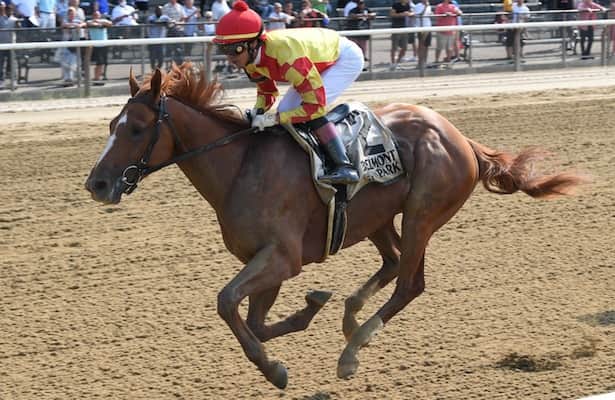 With a 3-for-3 record and a tough race in Saratoga's Curlin Stakes on Friday, First Captain has been the subject of much buzz.

Trainer Shug McGaughey acknowledged that the 3-year-old Curlin colt "is going to have to step up a little bit" in the 1 1/8-mile race Friday. The field includes Todd Pletcher's Dynamic One, coming back from an 18th-place finish in the Kentucky Derby; Saffie Joseph Jr.'s Collaborate, coming off a 5 1/4-length win in an allowance race at Gulfstream; and Harvard, a promising son of Pioneerof the Nile trained by Rodolphe Brisset.

McGaughey is looking forward to seeing how First Captain, a Curlin colt out of the A. P. Indy mare America, will do around two turns. He broke his maiden in a seven-furlong race at Belmont and then won twice at a mile on the Big Sandy.

"I hope that going a little farther around two turns will be what he wants to do," he said. "It's what he acts like, and looking forward to seeing on Friday."

First Captain has a graded-stakes victory under his belt, with a win in the Dwyer (G3) on July 5. The third-place finisher in that race, Snow House, returns in Friday's race for trainer Brad Cox.

McGaughey had not intended to run First Captain in the Dwyer, but said that worked for the better.

"It came up, looked like the right spot – run him in a graded stake, he was able to win. We got another race into him. It would have been a little bit difficult off two races, running him up here around two turns around this racetrack, which can be kind of a grueling race on a horse that's kind of lightly raced. So I'm glad I got it in."

The Curlin, on the other hand, has been part of the plan for months.

"I'd much rather run him in there than I would run him against Essential Quality or something in the Jim Dandy."

On another topic, McGaughey said Code of Honor – who has not raced since finishing fifth in the Pegasus World Cup (G1) – will not make his return in the Aug. 7 Whitney (G1), as has been speculated.

Code of Honor, who finished fourth in last year's edition, resumed working in June after a break and is at Saratoga.

"He had really good work here last Wednesday," breezing four furlongs in 50.69 seconds. "He'll work back this Wednesday. Probably maybe a little bit ahead of what I thought he was. I just have to figure out, find a spot to run him. It'll be a little bit later on – he's not ready to run."

McGaughey hopes to run Code of Honor at Saratoga in August, but he does not have a definite plan.

The Hall of Fame trainer does plan to enter Dreams of Tomorrow, a 4-year-old Speightstown colt, in the restricted Lure Stakes on the Saratoga turf on Aug. 7.

"He's won his last two starts and he seems to be doing really good. He had a really good work here over the weekend on the turf," breezing four furlongs in 52.2 seconds. "It's good spot for him, it's a condition stake going a mile and a 16th, so we'll just have to see."