McGaughey: Code of Honor's rival 'chickened out all the time' 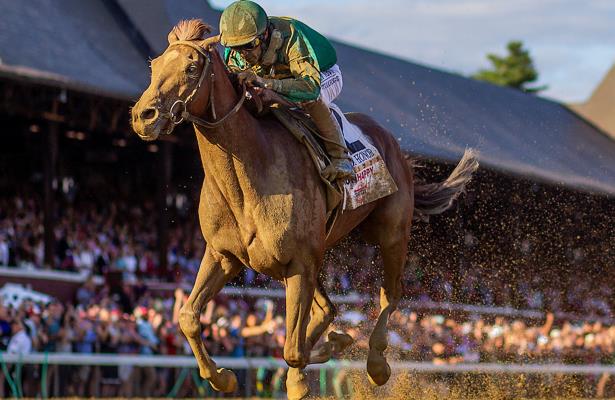 Trainer Shug McGaughey, whose Code of Honor is vying with Maximum Security for the Eclipse Award as champion 3-year-old male, criticized his rival and some voters as the process wound down.

McGaughey noted that Maximum Security, after being disqualified for interference in the Kentucky Derby and placed 17th while Code of Honor was placed second, was conspicuous in his absence from a number of major races after that.

“That horse, there were always excuses for him,” the Hall of Fame conditioner said. “I’m not a fan.”

Maximum Security was bred and owned by Gary and Mary West and is trained by Jason Servis. He  rebounded from a second-place finish to King for a Day in the Pegasus Stakes at Monmouth Park to win the Haskell Invitational (G1) at Monmouth on July 20. But he did not start in the Travers (G1), Jockey Club Gold Cup (G1) or the Breeders’ Cup Classic and was scratched from the Pennsylvania Derby (G1) due to colic.

“They chickened out all the time,” McGaughey said. “We never did that. We ran.”

Code of Honor, bred and owned by Will Farish, won the Travers. He placed second but was elevated to first after bumping three times with Vino Rosso in a controversial Gold Cup. The New York-based son of Noble Mission appeared to have little left in the tank after he traveled across the country to Santa Anita and finished a distant seventh in the Classic to close a year-long campaign.

Maximum Security, sired by New Year’s Day, missed more than three months before closing the season with a flourish and perhaps making a strong final impression on voters. He was impressive in winning the Bold Ruler (G3) on Oct. 26 at Belmont Park and the Cigar Mile (G1) on Dec. 7 at Aqueduct.

Maximum Security and Code of Honor both finished the season with eight starts. Also thanks to his rousing Florida Derby triumph, Maximum Security closed with three Grade 1 victories, one more than his rival. Code of Honor earned $2,211,570 to $1,791,100 for his foe. Omaha Beach, who made Santa Anita Park's Malibu Stakes (G1) his third Grade 1 victory of the season, also merits consideration; he, too, missed part of 2019 due to a health setback.

When McGaughey was asked if he thought his colt had done enough to secure the Eclipse Award, he replied, “I thought he had, but the problem is there are so many people voting who don’t know what they’re doing or talking about.”

The Daily Racing Form, the National Thoroughbred Racing Association and the National Turf Writers and Broadcasters comprise the voting organizations for the coveted Eclipse Awards. Voting concludes at 2 p.m. Thursday before finalists are announced Saturday.

McGaughey believes some voters lack credentials to be part of the process. “Some of these guys who have a vote in West Texas or something, he wouldn’t know Code of Honor from my dog,” he said.

Whatever the outcome, McGaughey is looking forward to a 4-year-old campaign with his multiple Grade 1 winner. Code of Honor was turned out in Kentucky following the Classic. He is expected to be re-united with his trainer at Payson Park in Indiantown, Fla., this weekend. He will resume training almost immediately.

“He was a late foal. He got bigger and stronger as the year went on,” McGaughey said. “I think he should have a big year.”