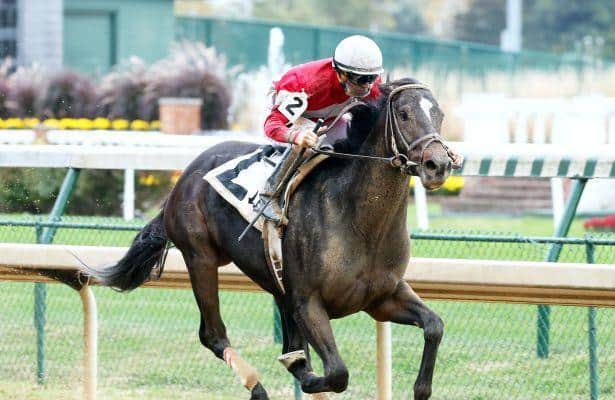 Whitham Thoroughbreds LLC’s unbeaten McCraken, an impressive winner of the Street Sense on the opening day of the Fall Meet, will attempt to keep his spotless racing record intact when he steps up to graded stakes competition and takes on 11 rivals in the 90th running of the $200,000 Kentucky Jockey Club Stakes (Grade II) for 2-year-olds on Saturday, Nov. 26 at Churchill Downs Racetrack.

The 1 1/16-mile race on the main track shares the spotlight with the $200,000 Golden Rod (GII) for juvenile fillies on the track’s popular “Stars of Tomorrow II” racing program devoted exclusively to races for 2-year-old Thoroughbreds. Post time for the first of 12 races on Saturday is 1 p.m. (all times EST) and the Kentucky Jockey Club is scheduled to be the 11th race with a post time of 5:56 p.m. The Golden Rod will be the day’s ninth event with a post time of 4:57 p.m.

The Ian Wilkes-trained McCraken, a homebred son of Ghostzapper, is the 7-2 favorite for Saturday’s race in Churchill Downs odds maker Mike Battaglia’s morning line odds. He impressed in his Oct. 2 debut at Churchill Downs when he rallied to win a 6 ½-furlong maiden race by 2 ½ lengths. McCraken followed that victory with an emphatic victory in the $80,000 Street Sense Overnight Stakes during the “Stars of Tomorrow I” program that opened the Louisville track’s Fall Meet on Oct. 30.

Brian Hernandez Jr. was in the saddle for both of McCraken’s wins and will be in the irons as the colt breaks from post 11 in the Kentucky Jockey Club.

Calumet Farm’s Wild Shot, trained by “Rusty” Arnold, will bid for his first graded stakes victory in the Kentucky Jockey Club following a strong third-place run behind Sentient Jet Breeders’ Cup Juvenile (GI) winner and likely 2-year-old champion Classic Empire in the $500,000 Claiborne Breeders’ Futurity (GI) at Keeneland. The runner-up in that race was Lookin At Lee, who finished fourth in the Breeders’ Cup race in his next start.

A victory in the Kentucky Jockey Club by Calumet Farm, which is now owned by Brad Kelley, would be the second in the race for the legendary Kentucky racing and breeding institution that won its 1934 renewal with Nellie Flag, who was that year’s champion 2-year-old filly. Calumet is the all-time leader in Kentucky Derby victories with eight, the most recent being the 1968 win via disqualification by Forward Pass. A victory by Wild Shot would make Calumet the all-time leader in stakes wins at Churchill Downs.  It is currently tied at 32 stakes victories with Claiborne Farm, another Kentucky racing and breeding icon. Calumet also owns Kentucky Jockey Club entrant Perro Rojo, a son of Birdstone trained two-time Kentucky Derby winner Nick Zito.

Arnold is bidding for his third Kentucky Jockey Club victory after earlier wins with Tricky Creek in 1988 and Mt. Pleasant in 1986.

Wild Shot, listed as the 4-1 second choice in Battaglia’s morning line, will start from post three under jockey Corey Lanerie.  Perro Rojo, who will be ridden from post 10 by Jon Court, is a 30-1 risk on the morning line.

Another Kentucky Jockey Club contender Kendall Hansen’s Han Sense (10-1), the Mike Maker-trained runner-up to the impressive Hemsworth in the Nashua (GII) at Aqueduct in his most recent start. Saturday’s race will be his fifth stakes race in as many starts after the Iowa-bred son of his owner’s 2011 Eclipse Award juvenile champion Hansen won the restricted Iowa Cradle Stakes at Prairie Meadows in his August racing debut. After a fifth-place finish on turf in the Kentucky Downs Juvenile, Han Sense shipped to Canada for a runner-up finish to Golden Hawk in Woodbine’s Grey Stakes (GIII).

Han Sense drew the rail post and will be ridden by Julien Leparoux.

Another well-traveled member of the field is Nancy Vanier, Lynda Williamson, Keith Kiley, Mike Schmitt, Bob Radtke and Cartwright Thoroughbreds V LLC’s Romeo O Romeo (15-1), a Chicago-based and Ontario-bred son of Macho Uno who finished third on the turf to Tiz a Slam in his most recent start in the Cup and Saucer Stakes at Woodbine. The Brian Williamson-trainee won at first asking over the synthetic Polytrack surface at Chicago’s Arlington Park prior to a runner-up finish behind Wellabled in the Arlington-Washington Futurity (GIII). Romeo O Romeo then travelled to Pennsylvania for a third-place finish to that rival in the 6 ½-furlong Fitz Dixon Jr. Memorial Juvenile over the synthetic Tapeta surface at Presque Isle Downs.

The Kentucky Jockey Club will provide star-making opportunities for several contenders based at Churchill Downs.

Trainer Patrick Byrne sends out a pair of promising young horses in Chuck and Maribeth Sandford LLC’s Just Move On (5-1) and Silent Decree (15-1). Just Move On, a son of Street Boss, has two wins from five starts that include an impressive 2 ½-length victory in a Nov. 10 allowance race at the Kentucky Jockey Club distance. Silent Decree, a son of Bodemeister, finished fourth to McCraken in the Street Sense and has a record of 1-1-2 in five races.

Harry T. Rosenblum and Robert V. LaPenta’s Uncontested (5-1) rolled to an easy six-length victory in his lone start at 6 ½ furlongs at Keeneland on Oct. 19. The son of Tiz Wonderful is trained by Wayne Catalano and must overcome the outside post in the 12-horse field.

Winchell Thoroughbreds LLC’s Total Tap (8-1) romped by 7 ¼ lengths on the grass in his Sept. 23 racing debut at Churchill Downs. The Steve Asmussen-trained son of Candy Ride (ARG) finished fourth on the main track to Thirstforlife and Kentucky Jockey Club rival Just Move On in a 1 1/16-mile allowance race at Keeneland on Oct. 30.

Churchill Downs Racing Club’s Warrior’s Club (8-1) enters the Kentucky Jockey Club off a 2 ¾-length victory in Churchill Downs’ restricted $300,000 Spendthrift Stallion Stakes for Hall of Fame trainer D. Wayne Lukas on Oct. 20. It was the first victory in six races for the son of Warrior’s Reward, who raced with blinkers for the first time in that victory at seven furlongs. Lukas has a record four victories in the Kentucky Jockey Club.

Klaravich Stables Inc. and William H. Lawrence’s Shareholder Value (15-1) is based at Churchill Downs for trainer Tom Amoss, but the son of Uncle Mo will make his first race over the track as he makes his fourth career start in the Kentucky Jockey Club. The Uncle Mo colt debuted with a fourth-place run on turf at Saratoga before he finished a close third on the grass in a Kentucky Downs maiden race. Shareholder Value notched his first career win last time out in a 5 ¼-length romp in an off-the-turf one-mile maiden race at Keeneland.

Completing the 12-horse field is Justice Farm’s Jocker Justice (30-1), the Ohio-bred winner of the Cleveland Kindergarten Stakes at Thistledown. The son of Stay Thirsty has two wins from his five races.

All entrants in the race will carry 122 pounds.