McCarthy aims for a second Pegasus with Independence Hall 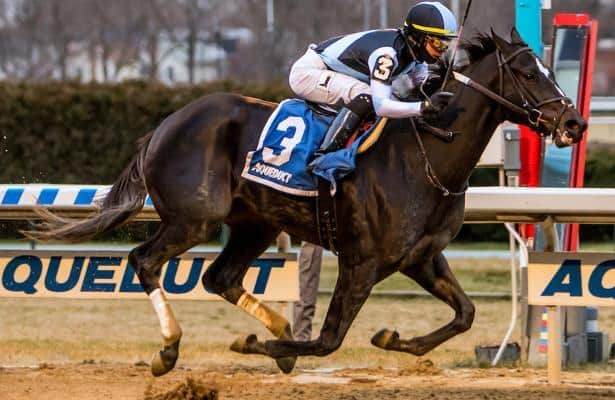 The Pegasus will be the first start for Independence Hall since he finished fifth of six, nearly 10 lengths behind Charlatan in the Malibu (G1) on Dec. 26 at Santa Anita Park. McCarthy expected a much stronger performance in the seven-furlong Malibu. Prior to the Malibu, he was a sharp allowance winner at Del Mar in his first start since the Florida Derby.

“For one reason or another, which I can’t put my finger on, he just did not seem to fire that day,” McCarthy said. “I have to draw a line through it. The horse has trained forwardly since.”

Much has changed between trips to South Florida for Independence Hall, who is co-owned by Eclipse Thoroughbred Partners, Twin Creeks Racing Stables, and Kathleen and Robert Verratti. Following his disappointing finish as the 3-1 third choice in the Florida Derby, he was given a sabbatical and later moved from the East Coast-based trainer Michael Trombetta to Michael McCarthy in California.

McCarthy won the 2019 Pegasus with City of Light.

Independence Hall has had two breezes this month. The most recent was six furlongs in 1:12.60 at Santa Anita on Saturday.

“His work was very, very good,” McCarthy said. “If you bring a horse into a $3 million race, I think this is the kind of work you want to bring him in off.”

Jockey Flavien Prat will ride Independence Hall for the first time in the Pegasus.

Robert Verratti purchased Independence Hall as a yearling from Constitution’s first crop for $100,000 at the 2018 Keeneland September sale as a pinhooking prospect. On the advice of his bloodstock agent Dennis O’Neill, Verratti decided to hold onto the colt, as a buy-back at the Fasig-Tipton Gulfstream sale of 2-year-olds in 2019.

After Independence Hall easily broke his maiden at Parx in September, Eclipse and Twin Creeks purchased interests in the colt.

Independence Hall promptly built his reputation as a Kentucky Derby prospect for his ownership group with a 12 ¼-length win in the Nashua (G3) and a 4 ½-length win in the Jerome at Aqueduct and was second as the 3-5 favorite in the Sam F. Davis (G3) at Tampa Bay Downs. The lackluster Florida Derby outing led to a pause in his career and a vacation at WinStar Farm.

“They just decided that he needed a little time off, a bit of a mental freshening more than anything. It seems to have done him some good,” McCarthy said. “The horse has come to me in very good order. The body of work he put together last year I thought was very good. We are just trying to go ahead and build on that.”

McCarthy said that Independence Hall arrived from Kentucky during the summer and was ready to resume training. He had his first breeze on Sept. 26 and won a 6 ½-furlong optional claimer on November 8.

“The horse fell into a pretty nice routine once he got here, was very straight forward,” McCarthy said. “The first race for us at Del Mar, obviously we were expecting a decent performance with him. I thought the way he won was more or less what we had been seeing in the morning. It was a perfect setup for a race like the Malibu.”

Though the Malibu did not work out as his connections had hoped, the colt came out of the race well and they decided the next challenge would be the nine-furlong Pegasus, which offers the highest purse in North America for older horses outside the Breeders’ Cup.

“It was one of those things, as some of the invitees started falling by the wayside, this became more and more of an option,” McCarthy said. “It’s $3 million. It’s a good spot to take a swing at something like this. You may never get this chance again until Breeders’ Cup time, nine months from now, for this kind of money. Why not?”

McCarthy welcomes the opportunity to join Hall of Famer Bob Baffert as a two-time Pegasus-winning trainer.

“That would be awfully nice,” he said. “I’m bringing a horse in who is training as well as I could ask him to be. We’ll see what happens.”

*Rating is based on HRN fan votes, which rank the Top Active Horses in training.
Independence Hall