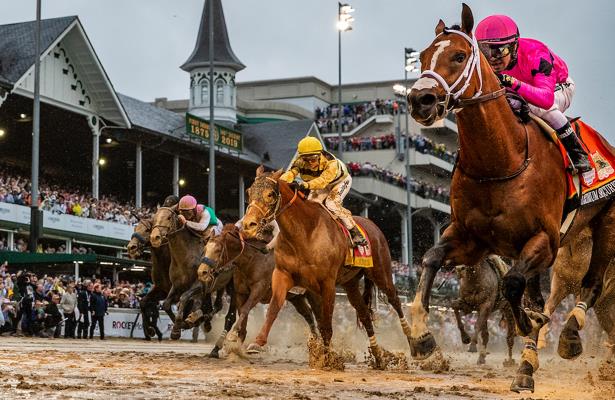 Owners of Maximum Security, the colt disqualified from a win in the Kentucky Derby, began their legal battle late Tuesday seeking to overturn a decision they say stems from a "bizarre and unconstitutional process."

In a lawsuit filed in U.S. District Court in Frankfort, Ky., Gary and Mary West asked that the stewards’ decision be reversed and that purse money — of which the winner received $1.86 million in the Derby — be redistributed.

Defendants include the trio of stewards who made the unanimous decision to elevate Country House to first after Maximum Security veered out near the 5/16ths pole at Churchill Downs and was ruled to have interfered with his rivals.

In addition to purse money, the lawsuit says Maximum Security's connections were denied "a professional accomplishment that any horseman would cherish for life, plus the very substantial value that a Kentucky Derby winner has as a stallion."

The Wests have argued that War of Will, who ran behind Maximum Security through the far turn of the May 4 race, made contact with their colt, disturbing him and causing the move. That defense did not work for jockey Luis Saez, who on Sunday was assigned a 15-day suspension from stewards as a further sanction following the race day disqualification.

The Wests also point to the process by which stewards made their call, including which jockeys stewards did -- and didn't -- speak to in the 22 minutes after the race before making a historic call, the first time in 145 years a Derby winner was taken down due to interference.

The lawsuit says neither connections nor the public were immediately made aware that, in addition to Country House jockey Flavien Prat's objection, Jon Court, aboard Long Range Toddy, had also claimed foul.

“One of them I could see getting it wrong, but three on the speaker told me there was one claim of foul,” Maximum Security's trainer, Jason Servis, said last week. “I’m adamant that’s the truth.”

According to the document, stewards disallowed Prat's objection but upheld Court's, leading to Maximum Security's placing in 17th, just behind Long Range Toddy. The Wests also claim that Court lodged an objection against War of Will and Tyler Gaffalione but did not speak to that jockey.

Both of those bits are new information.

“We’re saying that because that rider (Gaffalione) didn’t claim a foul...that the other incidents are a moot issue for us, because it wasn’t us,” Glass added.

The West first attempted to appeal the stewards’ decision through the Kentucky Horse Racing Commission. They were denied a hearing because, as the law reads, all stewards decisions “shall be final.”

That, according to the lawsuit, denies horsemen due process.

Along with stewards Barbara Borden, Butch Becraft and Tyler Picklesimer, Marc Guilfoil, executive director of the KHRC, was named as a defendant in the Wests’ lawsuit.

Maximum Security, a homebred son of New Year's Day, has relocated to New Jersey's Monmouth Park and will likely bypass both the second (Preakness Stakes) and third (Belmont Stakes) legs of the Triple Crown.