Maximum Security is again the No. 1 ranked Thoroughbred 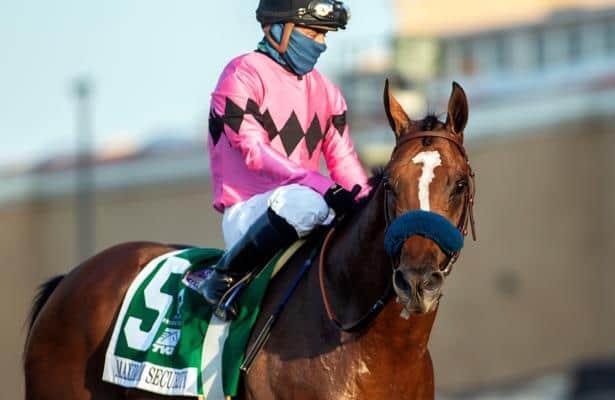 Maximum Security is once again ranked as the best American horse in the weekly NTRA Top Thoroughbred Poll. About five months passed since the Champion 3-Year-Old of 2019 had controversy take away at his No. 1 spot in the rankings.

Saturday’s easy victory in the Grade 1 Pacific Classic made it clear to most of the voters that the now Bob Baffert trainee deserves to be back in consideration for Horse of the Year.

In recent weeks, Maximum Security had been slowly regaining favor among voters, but this week he garnered 16 votes as the top Thoroughbred, and 15 others ranked him in the No. 2 position. In total, he was 46 points ahead of last week’s leader, Vekoma.

Several members of the media still are not ready to move Maximum Security into the top spots and have him ranked in the lower half of their ballots.

Right now, the son of New Year’s Day has three wins in as many starts this year — the San Diego Handicap (G2) and the Pacific Classic for Baffert along with the Saudi Cup for indicted trainer Jason Servis.

Maximum Security’s recent win earned the 4-year-old colt a “Win and You’re In” spot in the Breeders’ Cup Classic at Keeneland on Nov. 7. Baffert said that he would have one more start before the Classic, but he has not picked out that race yet.

Tiz the Law received 11 votes as the top Thoroughbred, which helped put the Kentucky Derby favorite in the No. 5 position. Every year, some voters are reluctant to support to a 3-year-old in this poll until after the Kentucky Derby has been run. Although Tiz the Law is the unanimous choice as the Top 3-Year-Old, some voters do not even mention him in their Top Thoroughbred rankings.

Tiz the Law has a perfect record in four starts this year, including three Grade 1 victories in a row in races restricted to 3-year-olds — the Florida Derby, Belmont Stakes, and Travers.

The Sackatoga Stable runner will likely contend the rest of the unconventional 2020 Triple Crown with the Derby on Sept. 5 and then the Preakness on October 3. If Tiz the Law continues to win, then the Breeders’ Cup Classic could end an unprecedented year.