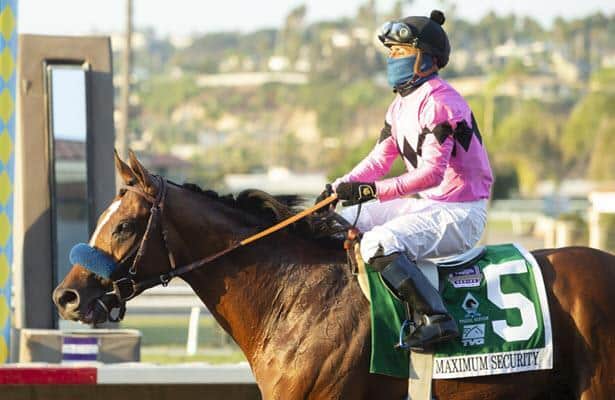 Maximum Security, making his second start for Hall of Fame trainer Bob Baffert, went to the lead and drew off late to win the Grade 1, $500,000 Pacific Classic at Del Mar and earn an all-expenses paid trip to the $7 million Breeders' Cup Classic later in the year.

Coming off a nose victory over Midcourt in last month's San Diego Handicap (G2) at Del Mar, Maximum Security and jockey Abel Cedillo broke sharply and ushered the field through fractions of :23.93 and :47.98 for the opening half mile while Sharp Samurai and Midcourt prompted the pace. With Sharp Samurai remaining lapped on Maximum Security's outside through six furlongs in 1:12.37, last year's champion 3-year-old colt began to gradually edge away from that stubborn rival nearing the quarter pole and then poured it on in the stretch to win going away as the 2-5 favorite.

Sharp Samurai, who was switching to dirt after being exclusively a turf horse in recent seasons for trainer Mark Glatt, held second and was followed across the wire by Midcourt and last year's winner Higher Power. Maximum Security, who paid $2.80, completed 1 1/4 miles on a fast track in 2:01.24.

"It was very relieving to see him once he got the lead and a nice rhythm," Baffert said. "I didn't think the mile and a quarter would be a problem but you never know."

Owned by Gary and Mary West and the partners at Coolmore, Maximum Security improves his record to 12: 10-1-0 with more than $12 million in earning. He was disqualified from first in last year's Kentucky Derby  and placed 17th because of interference in the stretch, and the lone runner-up finish came in Monmouth Park's Pegasus Stakes when prepping for the Grade 1 Haskell Invitational he would go on to win.

Additionally, the bankroll does not reflect his winner's share of the purse in the $20 million Saudi Cup earlier this year. Officials there are withholding payment pending an investigation into Maximum Security's previous trainer, Jason Servis, who was subsequently federally indicated on horse doping charges.

The Pacific Classic win by Maximum Security was enough to stir the emotions of Gary West, who also bred the colt with his wife.

“I’ve got tears in my eyes; I’m so happy," West said. "He looked so comfortable out there. There were a lot of good horses in that race, especially last year’s winner (Higher Power). Sharp Samurai stuck with us. But we were best. I’m really proud of him.”

After the race, Baffert was quick to heap praise on Maximum Security and what's been a star-crossed career.

"I think this horse is a top horse and people need to know he's the real deal," Baffert said on TVG. "It's a shame what he's gone through. He is a great horse.

“I felt a lot of pressure because I didn’t want to be the one to slow him down," Baffert later added. "But I got a healthy horse from the Wests. He just galloped around out there. He’s just built like a powerful horse and he’s light on his feet. I’ve always had a lot of respect for him because I’ve been chasing him. We were expecting something like this.”

This was the sixth Pacific Classic win for Baffert, tying the late fellow Hall of Famer Bobby Frankel for the most all time.