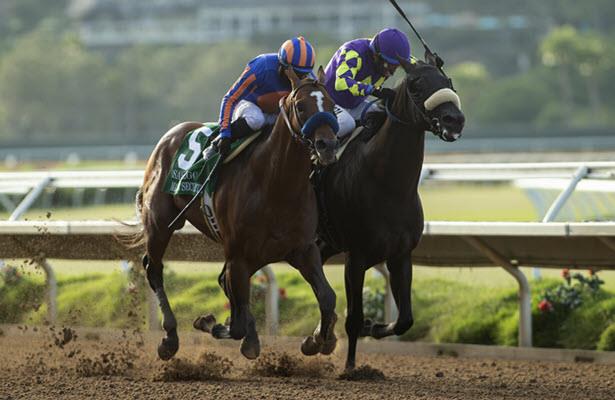 Maximum Security worked six furlongs in 1:12.80 on Sunday morning, an exercise that drew a rave review from Hall of Fame trainer Bob Baffert.

“(Maximum Security) worked the best he has worked for me,” Baffert said via text. “Right on schedule for the Pacific Classic. A very impressive breeze.”

With Juan Ochoa up, Maximum Security – who won the Grade 2 San Diego Handicap on July 25 in his first start for Baffert in a career of nine wins in 11 starts with earnings of nearly $12 million – was sent out along with stablemate McKale, a 5-year-old allowance winner.

Maximum Security’s work was the best, by nearly three seconds, of five total at the distance.

Clocker Toby Turrell noted: “He looked relaxed throughout, gathered up a nice stride late and was widening on his company under the wire.” McKale was officially timed in 1:00.00 for five furlongs.

Maximum Security (Outside) and McKale worked at @DelMarRacing on August 9th, 2020, for trainer @BobBaffert. Maximum Security is expected to make his next start in the G. I Pacific Classic on August 22nd.. Handicap, Bet and Watch on @1stbet. pic.twitter.com/NBW8Uu9Bti

Maximum Security, a son of New Year’s Day, bred and owned by Gary and Mary West of Rancho Santa Fe, Calif., is one of six probables and three possibles for the $500,000 Pacific Classic (G1). The event’s 30th running is scheduled Aug. 22 as part of a five-stakes program.

Baffert confirmed that Abel Cedillo, aboard for the San Diego, would retain the mount for the Pacific Classic.

“Now all we’ve got to do is get those (race sponsor) TVG guys to raise the purse …LOL,” Baffert texted.