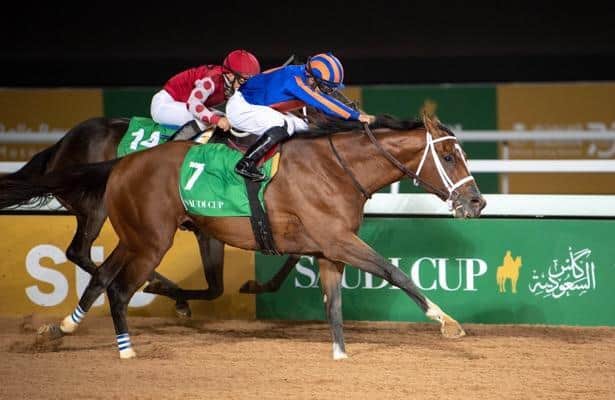 Maximum Security – the first Kentucky Derby winner ever to be disqualified for an on-track incident – now has a new claim to fame: winner of the world’s richest-ever horse race.

The 4-year-old New Year’s Day colt overcame Mucho Gusto in the stretch and held off a late-charging Midnight Bisou on Saturday to win the $20 million Saudi Cup at King Abdulaziz Racetrack.

Maximum Security was named last month as Eclipse Award Champion 3-year-old Colt for a sparkling 2019 campaign where he won three Grade 1 events. Still, the colt’s most memorable moment came in the Kentucky Derby, when he was disqualified from first to 17th for what stewards ruled as interference.

There was no such controversy in the Saudi Cup as the former claimer beat the world’s best.

Jockey Luis Saez kept Maximum Security just off the pace Saturday set by Mucho Gusto, a Grade 1 winner from the Bob Baffert barn. Coming off the turn, those two got some separation from the field.

Maximum Security kicked onto a lead and held back a rail-running charge from Midnight Bisou to triumph by a half-length. The Jason Servis trainee covered 1 1/8 miles in 1:50.59.

The 6-5 favorite, Maximum Security returned $4.40. Benbatl was third and Mucho Gusto fourth behind the top two. Of the other American runners, Tacitus ran fifth and McKinzie was a disappointing eighth as the 7-2 second choice.

Maximum Security ran Saturday in the colors of Coolmore America, which is now campaigning the colt along with breeders Gary and Mary West. He has now raced three times since surviving a colic scare early last fall and has won all three races, all against older competition.

Midnight Bisou's close runner-up finish was a validating performance by the 5-year-old mare. She won seven of her eight starts last year – all in graded company – on the way to being named Eclipse Award 2019 Champion Older Dirt Female.

With her effort in mixed company Saturday, Midnight Bisou could also stay abroad to take on the boys again in the Dubai World Cup for trainer Steve Asmussen and jockey Mike Smith.

Benbatl's third-place run Saturday was another impressive effort for the 6-year-old Saeed bin Suroor trainee. He entered off back-to-back Group 2 wins at Meydan Racecourse, site of the Dubai World Cup.