Maximum Security back in top 5 of NTRA poll 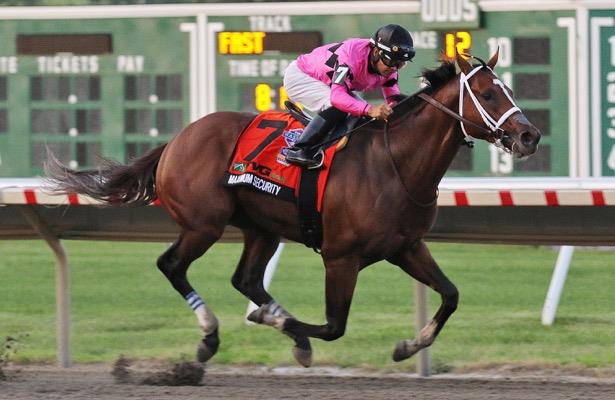 Champion Maximum Security, who led the National Thoroughbred Racing Association Top Thoroughbred Poll in early March, has moved back into the top five of the rankings this week following his victory in the Grade 2 San Diego Handicap at Del Mar on July 25.

In his first start since taking the $20 million Saudi Cup on Feb. 29, Maximum Security showed his grit when he prevailed by a nose over Midcourt in the 1 1/16-mile San Diego Handicap. That effort -- which was also his first since joining the barn of Hall of Fame trainer Bob Baffert -- earned the 2019 Eclipse Award-winner for champion 3-year-old male two first-place votes and 228 points this week, moving him from 10th to fourth overall in the poll standings.

Zulu Alpha (158 points) sits behind Maximum Security in the fifth position, followed by Monomoy Girl, the champion 3-year-old filly of 2018, in sixth with one first-place vote and 129 points. By My Standards, who is also slated to start in the Whitney, is seventh with 113 points while top-ranked sophomore Tiz the Law is eighth with two first-place votes and 112 points. Mucho Gusto (92 points) and Code of Honor (one first-place vote, 83 points) round out the top 10.

Less than two weeks from his planned start in the Travers Stakes (G1) at Saratoga, Tiz the Law continues to hold a commanding lead in the NTRA Top Three-Year-Old Poll with 39 first-place votes and 399 total points. Honor A. P., who is set to run in the Shared Belief Stakes at Del Mar on Aug. 1, ranks second with one first-place vote and 355 points and is followed by Haskell Stakes (G1) victor Authentic (284 points).