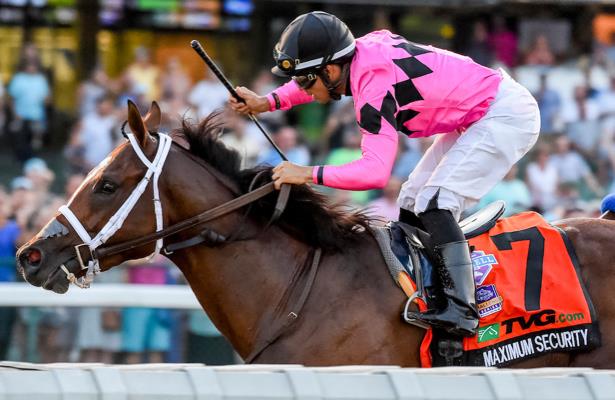 A two-time stakes winner at Del Mar this past summer, Maximum Security comes off a huge three length win in the Grade 1 Pacific Classic on Aug. 22 and will once again be a prohibitive favorite in what will be his 13th career start.

Baffert’s Improbable, winner of the Grade 1 Whitney Stakes at Saratoga Aug. 1, earned a career-best Beyer Speed figure of 106 and will be bidding for his third consecutive win.

The John Shirreffs-trained Midcourt, who was beaten a nose by Maximum Security two starts back in the San Diego Handicap, was a well beaten third behind “Max” in the Pacific Classic and will be facing him for the third consecutive time on Saturday.

Immensely talented but star-crossed, this 4-year-old colt by New Year’s Day appears to be thriving in Baffert’s care.  Ridden in his two Del Mar starts by Abel Cedillo, he’ll be reunited with eastern-based Luis Saez, who has finished first on him in six out of seven starts, most recently in Saudi Arabia, where he took the $20 million Saudi Cup by three quarters of a length. Although the Saudi Cup results remain official, Maximum Security’s purse earnings remain on-hold as an investigation into his original trainer Jason Servis continues.

Adding to his hard-luck resume is the fact he became the only Kentucky Derby winner to ever be disqualified for a racing infraction in the 2019 Derby, a race he won by 1 ¾ lengths with Saez aboard.  An official winner of 10 out of his 12 starts, Maximum Security has banked $12.1 million and will be making his first-ever start at Santa Anita.

The 4-1 post time favorite in the 2019 Kentucky Derby, he finished fifth, beaten 3 ¼ lengths by Maximum Security.  A winner two starts back of the Grade 1 Hollywood Gold Cup, run at Santa Anita on June 6, he’ll be reunited with Drayden Van Dyke, who did not ride him at Saratoga.  Van Dyke has won aboard Improbable in five out their seven pairings, including his Gold Cup win.  A winner of six out of his 13 starts, Improbable, a 4-year-old colt by City Zip, has earnings of $1.5 million.

Although narrowly beaten two starts back in the San Diego Handicap, this 5-year-old gelding by Midnight Lute was no match for Maximum Security in the Pacific Classic when third.  A shining testament to Shirreffs’ horsemanship, Midcourt has been able to overcome his idiosyncrasies, including bad manners in post parade.  If his mind is right, he rates an upset chance over a track on which he is 8-3-1-2.