Maxfield breezes in company from gate ahead of Whitney 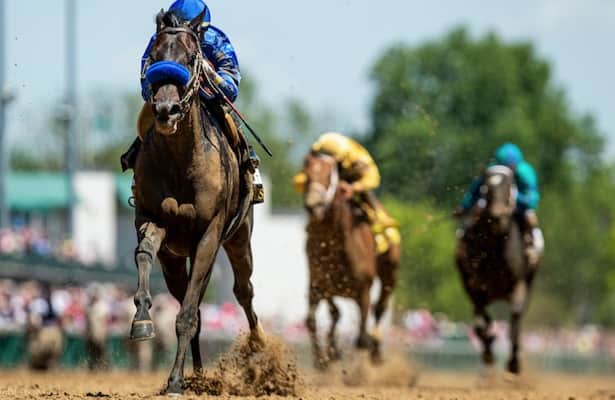 Godolphin homebred Maxfield, trained by Brendan Walsh, worked five furlongs from the gate Saturday under Jose Ortiz in preparation for the Grade 1, $1 million Whitney on Aug. 7 at Saratoga Race Course.

Maxfield, who breezed in company with 3-year-old maiden winner Business Model over the fast main track at 8:45 a.m., was caught by NYRA clockers through splits of 24.3, 48.2 and stopping the clock in 1:01.61.

“I just wanted the company to take him to the wire,” Walsh said. “I think the best part of it was the gallop out from the wire to an eighth out. I had him out in 1:13 and change. He's doing good. I couldn't ask for more than that.”

A winner of 7-of-8 starts, the 4-year-old Street Sense bay will enter the nine-furlong Whitney, a “Win and You’re In” qualifier to November's Grade 1 Breeders’ Cup Classic, from 3 1/4-length Grade 2 scores at Churchill Downs in the 1 1/16-mile Alysheba on April 30 and the Stephen Foster on June 26.

Walsh said Maxfield is thriving ahead of his first Saratoga start.

“He's doing as well as he's ever done right now,” Walsh said. “I hope he can run at least as well as he's done these last couple times and maybe even a little bit better. He likes it up here and is in a great frame of mind.”

Shortly after the Maxfield breeze, Hall of Fame trainer Todd Pletcher sent out St. Elias Stable’s multiple graded stakes winner Dr Post, last out winner of the Grade 3 Monmouth Cup on July 17, in company with Wertheimer and Frere homebred Happy Saver to work a half-mile in 49.25.

Happy Saver, winner of last year’s Grade 1 Jockey Club Gold Cup, is under consideration for a start in the Whitney.

Pletcher said he is also considering the Grade 1 Pacific Classic on August 21 at Del Mar for both Dr Post and Happy Saver as he looks to keep the pair separated with the 10-furlong Grade 1 Jockey Club Gold Cup, also a “Win and You’re In’ berth contest for the Breeders’ Cup Classic, slated for September 5 at the Spa.

“I thought the work was solid,” Pletcher said. “We'll see how he [Happy Saver] bounces out of it. I haven't quite decided on the Whitney yet.

“There's also the Pacific Classic in-between,” he continued. “I just have to weigh my options. It might give me an opportunity to split the two of them up if I don't run Happy Saver in the Whitney.”