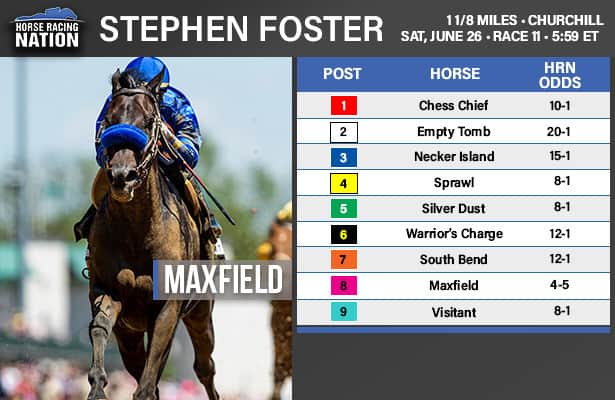 The Grade 2 $600,000 Stephen Foster, which will be run at Churchill Downs on Saturday, drew a field of nine. The Foster provides the winner an automatic berth in the 2021 Breeders’ Cup Classic at Del Mar on Nov. 6.

This century, three horses have won the Stephen Foster as part of their Horse of the Year campaigns – Gun Runner in 2017, Curlin in 2008, and in 2005 it was Saint Liam.

Here is a full-field analysis for the 1 1/8-mile Stephen Foster, with morning line odds provided by the Horse Racing Nation staff. The Foster will be run as race 11 of 12 with post time set for 5:59 p.m. EDT.

1) Chess Chief (10-1 – Into Mischief – Dallas Stewart / John Velazquez – 24: 4-4-4 - $671,648) This 5-year-old is the winner of the New Orleans Classic (G2) in March at odds of 5-1. That victory is sandwiched between a pair of third-place finishes in the Alysheba (G2) and the Mineshaft (G3). Both were behind the favorite Maxfield. The New Orleans is the lone graded stakes score for this Virginia-bred. His stalking style has allowed him to hit the board in half of his 24 career starts. Use underneath.

2) Empty Tomb (20-1 – Speightstown – Mike Maker / Ricardo Santana Jr. – 18: 4-4-4 - $254,006) Empty Tomb is a winner of three allowance races in his career at Churchill Downs, Belmont Park and Laurel Park. He finished third in the Queens County in December at Aqueduct. The son of Speightstown does his best running when is a pressing the early pace. He comes into the Foster after his May 22 victory under the Twin Spires. Empty Tomb has four tries at nine furlongs with a pair of seconds and a third. This race seems to be just beyond his best distance and class level. Toss.

3) Necker Island (15-1 – Hard Spun – Chris Hartman / Mitchell Murrill – 13: 3-1-3 - $280,738) Necker Island won three races at Churchill, including a late-running victory by a neck in an allowance under the Twin Spires. That was his first victory since 2019. As a 3-year-old, he was third in the Ellis Park Derby and the Indiana Derby (G1) and then finished ninth in the Kentucky Derby (G1). Interestingly, he was claimed for $100,000 by trainer Chris Hartman before that pair of show finishes. He will have a positive race flow with plenty of speed signed on. Use underneath.

4) Sprawl (8-1 – City Zip – Thomas Drury Jr. / Brian Hernandez Jr. – 14: 3-0-4 - $219,453) Sprawl is in the best form of his career this year. Most recently, he was beaten by only a head when third in the Blame at Churchill after pressing the early pace. He had a rough start and then fought hard down the stretch. Before that, he won an allowance by more than seven lengths on a sloppy track and faded to fourth in the Ben Ali (G3) against Silver Dust. He will have to deal with plenty of pace pressure in this field. Toss.

5) Silver Dust (8-1 – Tapit – Bret Calhoun / Adam Beschizza – 33: 7-7-5 - $975,677) Silver Dust has had a long and accomplished career that includes four victories in Grade 3 races over the past three years. The Bret Calhoun trainee made his 2021 debut on the turf, which the veteran gelding did not appreciate. But back on the dirt at Keeneland in April, the son of Tapit won the Ben Ali on a sloppy track while having to race without Lasix. He does his best running while pressing the early pace. Two of his seven victories happened at Churchill. On his best, he is a contender, but you have to wonder how this 7-year-old how will fare in a quality field at his age. Use underneath.

6) Warrior’s Charge (12-1 – Wicked Strong – Brad Cox / Florent Geroux – 15: 5-2-3 - $887,710) This 5-year-old has not won a race since the Razorback Handicap (G3) at Oaklawn Park in February of 2020. Since that front-running effort going a 1 1/16 miles, Warrior’s Charge ran second three times, twice in graded stakes. This Florida-bred has tried the nine-furlong distance of the Foster only twice, which indicates that he is more comfortable in shorter races. This year he began with a place finish in an allowance at Oaklawn, but in two subsequent graded stakes he was fifth and then sixth. Toss.

7) South Bend (12-1 – Algorithms – Bill Mott / Tyler Gaffalione – 16: 4-2-2 - $448,069) In 2019, South Bend was an exciting juvenile after winning the first three starts of his career, including the Street Sense at Churchill. It then took about 1 1/2 years for him to win another race. As a 3-year-old, he raced 10 times, with five of them on the grass and five in graded stakes, including the Grade 1 Travers, Kentucky Derby, and Belmont Derby. After taking the winter off, Bill Mott brought him back to the races in April to win an allowance on the main track at Keeneland. Last month in the Blame at odds of 3-1, he raced in tight quarters down the stretch and got shut off, losing all chance. Having never won on the turf, the dirt is the right place for him. He is an interesting contender in here. Live long shot.

8) Maxfield (4-5 – Street Sense – Brendan Walsh / Jose Ortiz – 7: 6-0-1 - $908,782) Maxfield is currently ranked as the No. 7 race horse in the country in this week’s NTRA Top Thoroughbred Poll based on his victory in the Alysheba (G2) at Churchill Downs on the Kentucky Oaks undercard. He has only one loss in his seven-race career, which came in the Santa Anita Handicap (G1) in March. He began his 2021 campaign at Fair Grounds, which was the winter base of trainer Brendan Walsh, with a victory in the Mineshaft (G3). Maxfield has been training at Keeneland, and rider Jose Ortiz is expected to travel to Kentucky to stay on board. The son of Street Sense has never lost in three tries under the Twin Spires nor with Ortiz in the saddle. He will be a deserving favorite and the horse to beat as the only Grade 1 winner in the field. Top choice.

9) Visitant (8-1 – Ghostzapper – Bill Morey / James Graham – 12: 6-2-2 - $332,165) Visitant finished in second in the Alysheba (G2) at odds of 11-1 behind Maxfield after setting the pace. That was the best performance of his career on a dirt track and it came after a terrific winter of racing on the artificial surface at Turfway Park, where he won three times – twice in allowances and then in the Kentucky Cup Classic. In California as a 3-year-old, he won a stake at Golden Gate and was also third in the Affirmed (G3) on the main track at Santa Anita. It is worth noting that all six of his victories were on Tapeta racing surfaces – three at Golden Gate and three at Turfway. Use underneath.

Summary: In just about every way, Maxfield is a standout in this field of nine. He has a class advantage as the only Grade 1 winner in the field and has done very little wrong with six wins and a third in his seven-race career. Jose Ortiz will make the trip to Kentucky to stay on board, looking to win for the fifth time on Maxfield in the same number of starts.

In addition, Maxfield will get an ideal pace setup for his off-the-pace running style. In some form, five of the other horses in the field had their best results while being part of the early pace. Visitant and Silver Dust are the obvious choices to complete the exacta and trifecta, but South Bend, Chess Chief and Necker Island are worth using underneath at more generous odds.