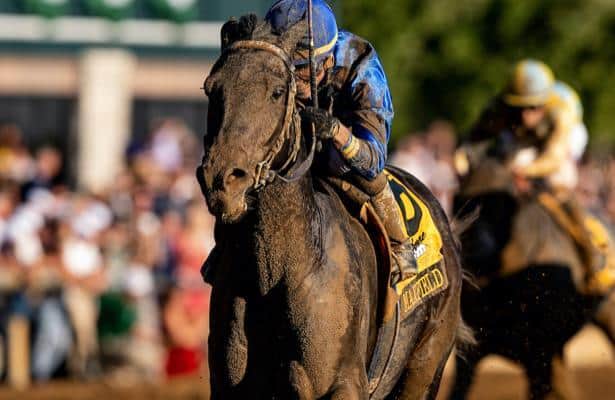 Jimmy Bell, head of Godolphin's U.S. operations, said the Street Sense colt -- unbeaten in his three starts -- will undergo surgery to repair the injury in his right-front leg and miss the 2020 Kentucky Derby.

"He went a maintenance half mile this morning," Bell said of Maxfield's breeze, measured in 49 seconds. "It was as nice as you'd want to see. We were on hand to watch.

"When he turned back to jog home, he was off. We got him back to the barn and took X-rays."

Weeks after a similar injury sent undefeated Nadal into retirement, Bell said there's plenty of hope Maxfield will continue his career on the racetrack once healed from a non-life-threatening ailment.

"This was very clean," Bell said. "It was non-displaced, so it's fortuitous if you want to look at it that way. It looks like a straightforward procedure. We'll always have a discussion, but certainly racing is still in the game plan."

Brendan Walsh trains Maxfield, a Godolphin homebred who also won Keeneland's Breeders' Futurity at age 2 after an eye-catching debut at Churchill Downs, showing a bold rally that has become his signature running style.

An ankle chip also requiring minor surgery left Maxfield out of the Breeders' Cup Juvenile. But the Kentucky Derby's postponement to Sept. 5 gave connections renewed hope their colt could factor in the Triple Crown series.

William Hill U.S. listed Maxfield as the Derby's 7-1 fourth choice this week behind only co-favorites Tiz the Law and Honor A. P. and Authentic (6-1).

"Sometimes all you're hoping for is not having any bad luck," Bell said, "and we just got a little unlucky here."