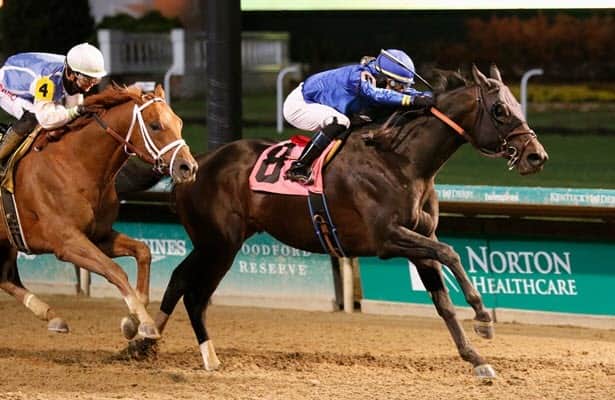 For all the cold mornings Brendan Walsh spent with Maxfield, it was only appropriate they would end their time together on a 35-degree night at Churchill Downs.

It was more appropriate that the 4-year-old colt full of championship potential for Godolphin and a career dotted with bad luck for all his backers should go out with a signature victory.

“Even if there is a horse as good as him, he’s a special horse, and they’ll have to be pretty good to better him,” Walsh said after Maxfield (6-5) put an exclamation on his 11-race record Friday by winning the Grade 1, $750,000 Clark Stakes.

“I’ve been on a lot of good horses, and he’s one of them, for sure,” jockey José Ortiz said. “He’s powerful. He’s a classic horse. A little unlucky, he got hurt at the wrong time sometimes, but we are very happy that we won today.”

The half-length victory over fast-closing Happy Saver (12-1) brought Maxfield’s career earnings to $2,001,812 and gave him his first Grade 1 victory in open company, his first without Lasix and his first after losing three times at the top level this year.

Friday’s triumph validated the unwavering faith connections had in the Street Sense colt.

#Maxfield goes out a dogged winner of the Clark (G1) from @ChurchillDowns with @jose93_ortiz in the irons one last time.

Wearing blinkers again after he was second adding them last month in the Woodward (G1) at Belmont Park, Maxfield broke in mid-pack from his outside post against seven rivals Friday. Ortiz quickly got him within striking distance of Midnight Bourbon (6-5, the favorite by $2,041), who set the early pace with fractions of 23.83, 48.00 and 1:11.70.

For the rest of the race, Maxfield was never more than 1 1/2 lengths behind. He either had Midnight Bourbon in front of him. Or no one.

“I was pretty confident the whole way around,” Walsh said. “He’s very laid back, and he had enough that he felt that horse coming to his girth.”

That horse was Happy Saver. As Midnight Bourbon faded and eventually finished 3 1/2 lengths up the track in third, the Todd Pletcher-trained 4-year-old made a run in deep stretch, reluctant to switch leads even as he made up ground.

“My horse put in a big effort,” Happy Saver’s jockey Tyler Gaffalione said. “I tried (to switch leads) twice, and you can’t keep fighting with him. You’ve got to just go on, and he gave me everything he had.”

In the final 100 yards, there was no doubt Maxfield was going to win, covering the 1 1/8 miles in 1:49.06 on a track rated fast after drying from Thursday rain.

Past performances alone showed Maxfield with five victories to start his career, including a previous Grade 1 score in the 2019 Breeders’ Futurity at Keeneland. Along the way, though, he was diagnosed with an ankle chip only days before he would have been the favorite in the Breeders’ Cup Juvenile at Santa Anita.

Seemingly off the Kentucky Derby trail in 2020, Maxfield appeared to have been spared when the race itself was derailed by COVID. The Derby was back in his plans again, especially after he won the rescheduled Matt Winn (G3) in his comeback in May.

Then the following month brought a condylar fracture to his right front leg. Not only was Maxfield out of the September running of the Derby, he could not race in the Breeders’ Cup last fall at Keeneland.

He came back with a pair of wins last fall and winter at Fair Grounds, including his first against older rivals. That led to a trip to California, where Maxfield finished third in the Santa Anita Handicap (G1). He would never finish out of the top two again.

“A lot of people were questioning, ‘Is he that good?’” Walsh said. “You don’t go 8-for-11 in your career and not finish outside of the first three ever without being an excellent horse.”

Victories in the Alysheba (G2) and Stephen Foster (G2), both at Churchill, led Maxfield to New York, where he ran up against likely 2021 champion Knicks Go in the Whitney (G1), finishing a resolute second.

As the 9-10 favorite in the Woodward, Maxfield settled for second place against Art Collector, renewing questions about whether he could deliver against open company in a Grade 1 race.

After being detoured again from the Breeders’ Cup, this time to cede the Classic stage to Godolphin-owned Essential Quality, Maxfield answered his critics Friday night at Churchill Downs. That is where he was a five-time starter. And a five-time winner.

Widely regarded as the best handicap horse in the country before last spring, Maxfield might be seen as a star-crossed horse with the talent of a champion if not the trophies as he becomes a stallion.

“This game teaches us you can never think about stuff like that,” Walsh said. “It happens all the time to the best of horses. You’ve got to get really lucky as well. And this year has been very special.”