Maxfield back in light training at Churchill Downs 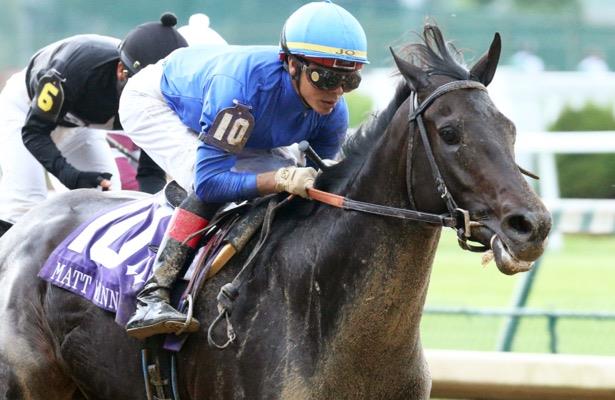 Godolphin’s undefeated homebred Maxfield, once considered a top contender for the Kentucky Derby, has returned to trainer Brendan Walsh’s barn at Churchill Downs after rehabbing a condylar fracture that removed him from Derby contention.

Maxfield, the Grade 1-winning son of Street Sense, began light training last week at Churchill Downs after he missed about 90 days of training from a non-displaced lateral condylar fracture that he suffered June 10 at Keeneland. At the time, the Breeders’ Futurity (G1) and Matt Winn (G3) winner was prepping for the July 11 Blue Grass Stakes (G2).

Plans for Maxfield’s return to the races have not been finalized.

It’s been a trying few months for Walsh, whose Derby dreams were dashed when Maxfield was sidelined. Last week, he lost his close friend, champion Irish jockey Patrick Smullen to pancreatic cancer. Walsh, who grew up in Ireland, spent several years alongside Smullen while working for Godolphin in Dubai.

“He’s gone way too soon, unfortunately,” Walsh said on “At the Races with Steve Byk.” “He was just a great guy. I’ve known Patrick for well over 20 years. We met in Dubai and he’d come out during the winter to ride. When he first came to Dubai I knew he was my kind of guy – with a quiet demeanor and was easy going. We’ve been the best of friends since.

Smullen, who was a nine-time Irish champion jockey, never rode in any races for Walsh but spent vacation one winter in South Florida at Palm Meadows.

“He came over and galloped for a week one time in Palm Meadows,” Walsh said. “…He always loved it here It was on his bucket list to see the Derby. Unfortunately it didn’t materialize.”