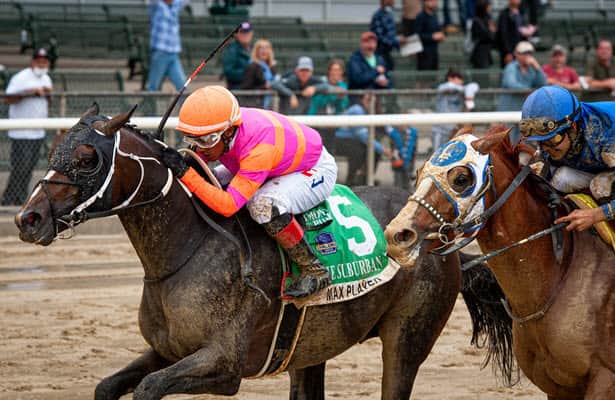 After registering a slew of respectable efforts in the sport’s biggest races for sophomores, Max Player won his first race as a 4-year-old, outdueling 4-5 favorite Mystic Guide in the final furlong to win by a neck in Saturday’s Grade 2, $400,000 Suburban at Belmont Park.

The 135th running of the Suburban, for 4-year-olds and up going 1 1/4 miles, earned Max Player an automatic entry to the Grade 1, $6 million Breeders’ Cup Classic in November at Del Mar by capturing the “Win and You’re In” contest. The Honor Code colt, owned by George E. Hall and SportBLX Thoroughbreds, was the only horse in 2020 to compete in all three legs of the Triple Crown, running third in the Belmont Stakes that was contested as the first leg before posting back-to-back fifth-place efforts in the Kentucky Derby and Preakness, respectively.

Returning to Big Sandy for the first time since the Belmont Stakes 13 months ago, Max Player broke from post 5 under Ricardo Santana, Jr. as Moretti led the six-horse field through the opening quarter-mile in 23.72 seconds, the half in 47.67 and three-quarters in 1:11.60 over a sloppy and sealed main track that was deluged by earlier rain.

Godolphin homebred Mystic Guide, making his first start since winning the Group 1, $12 million Dubai World Cup in March, made a strong move in the far turn under jockey Luis Saez, challenging the pacesetter from the inside.

In the stretch, Mystic Guide held the advantage, but Max Player made a furious bid to his outside. Running stride-for-stride, Max Player pulled ahead shortly before the Secretariat pole and completed the course in 2:01.95 to earn his first win since the Grade 3 Withers in February 2020 at Aqueduct Racetrack.

“He was training really well,” Santana, Jr. said. “If you saw him in the paddock, he was looking unbelievable. He always runs well on this track. He always tries hard. Today, he broke well and put me right there. I took the spot and no one wanted to go. As soon as he felt him inside, he kept on fighting until the end.”

Max Player, trained by Hall of Famer Steve Asmussen, started his 2021 campaign with a dull 11th-place effort in the Group 1 Saudi Cup in February before returning to the United States to run sixth in the Grade 3 Pimlico Special in May.

But Max Player relished the conditions in his first race on a sloppy track since he broke his maiden at second asking in December 2019 at Parx, improving his record to 3-1-2 in 10 starts.

“He’s been here since Pimlico and he had been doing really well,” said Asmussen assistant Toby Sheets. “He’s kind of a funny horse. He always has more, but sometimes he doesn’t give it. He had a clear trip today and that helped so much. He finished well. He needed a little confidence builder and he got one today. He ran a nice race.”

Mystic Guide, the winner of last year’s Grade 2 Jim Dandy who started his 4-year-old year with a six-length win in the Grade 3 Razorback Handicap in February at Oaklawn before his Dubai triumph, finished 2 1/2-lengths clear of Happy Saver for second. The Michael Stidham trainee has never failed to hit the board in nine starts, moving to 4-3-2.

“Three months away and he comes back on a very difficult racetrack,” Stidham said. “Even though he handled the [sloppy] track at Oaklawn, this was a totally different surface. Luis said he was tired through the lane. It’s not that surprising that a horse coming off three months might get tired off this kind of a racetrack.

“Certainly no disgrace in defeat,” Stidham added. “He ran hard and ran well. We’re going onward and rolling toward the Breeders’ Cup. We’ll see how he comes out of it and then start talking about what’s next.”

Saez, who has been aboard Mystic Guide for all three of his starts this year, said the three-month respite played a role.

“It was a perfect trip. He broke and was right there. At the three-eighths [pole], he made a nice move, but in the end he got pretty tired,” Saez said. “I think it was the layoff.”

Happy Saver, conditioned by Hall of Famer Todd Pletcher, bested stablemate Moretti by a neck for third. Informative and Prioritize completed the order of finish.

“He [Happy Saver] got the trip we thought he would get with Moretti on the lead,” Pletcher said. “We were in a good stalking position right beside Mystic Guide. He ran just a touch flat. I don’t know if part of that was second off the layoff, the sloppy track, or stretching to a mile and a quarter against a good field of horses. I thought he showed a lot of class. He kept trying to the wire and got up for third. I’m hoping he’ll move forward off of this. It was only his second start of the year and we know there’s room for improvement."