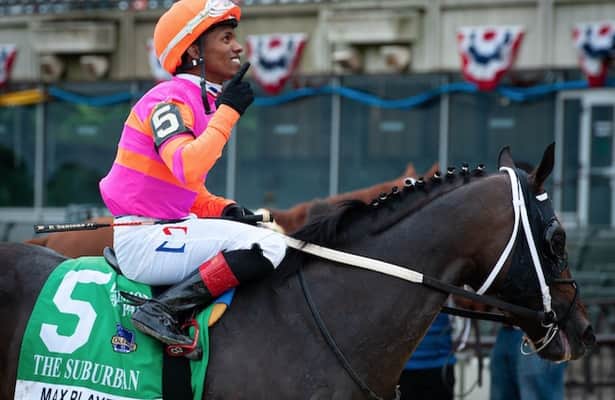 The 4-year-old son of third-crop sire Honor Code tracked Moretti's moderate pace and remained in the clear as Mystic Guide made an inside rally around the far turn. Despite Mystic Guide’s persistence, Max Player came out on top, besting the odds-on favorite by a neck under jockey Ricardo Santana Jr.

In capturing the 10-furlong race, Max Player earned an automatic entry into the $6 million Breeders’ Cup Classic on Nov. 6 at Del Mar.

Trained by Hall of Famer Steve Asmussen, Max Player was winless in his prior half-dozen starts heading into the Suburban, with his previous victory taking place in the Withers (G3) last February at Aqueduct. He was subsequently third in last year's Belmont Stakes and Travers (G1), both of which were won by Tiz the Law.

“He came out of it in good shape, ate up, got a nice little roll in the grass. He’s very happy,” said Asmussen’s Belmont-based assistant Toby Sheets.

After a distant sixth in the Pimlico Special (G3) on May 14, Max Player shipped straight to Belmont Park, recording five breezes over the training track.

“He gradually improved; he loves it here,” Sheets said. “He got to do some things that helped him. I’m very happy with him. The way he ran shows how he improved.”

Owned by George E. Hall and SportBLX Thoroughbreds and bred in Kentucky by K & G Stables, Max Player is out of the stakes-winning Not For Love mare Fools in Love, who also produced Seahenge, a Group 2 winner in England.