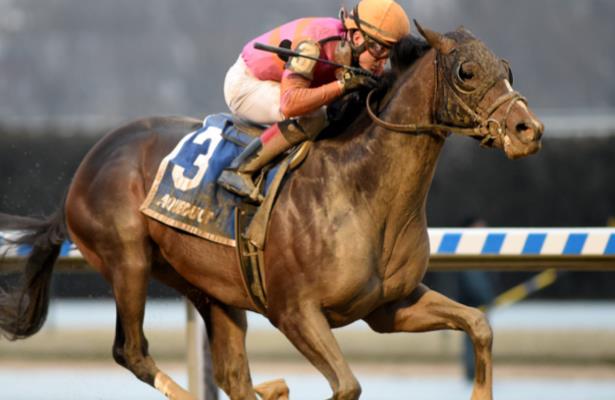 George E. Hall's Max Player will race out of his own barn as one of the local hopes in the 152nd renewal of the Belmont Stakes, to be contested at nine furlongs June 20 as the opening leg of the Triple Crown for the first time in history of the series.

"He had a nice workout today,” trainer Linda Rice said. “He went six furlongs in 1:13.4 on the training track and did it easily.

"We were happy with it. We'll give him two more workouts before the Belmont."

Rice said she had considered sending the Kentucky-bred Honor Code colt, a last-out winner of the Grade 3 Withers at Aqueduct, to Saturday's Matt Winn (G3) at Churchill Downs but changed course with the news of live racing returning in New York.

"Mr. Hall and I discussed it and decided that we didn't think we should travel our 3-year-old once we had a schedule here and things were starting back up at home," Rice said.

Out of the Not For Love mare Fools in Love, Max Player's second dam (Parlez) produced multiple graded-stakes winner International Star. The lightly raced Max Player is currently 37th on the Kentucky Derby leaderboard with 10 points and will look to add to those totals in the Belmont Stakes, which offers 150-60-30-15 Derby qualifying points to the top four finishers.

Max Player closed to finish second on debut in November at Parx in a one-mile maiden and graduated at second asking Dec. 17 over a sloppy Parx surface at the same distance. With Dylan Davis up for the first time in the nine-furlong Withers, a two-turn test, Max Player overtook Remsen (G2) winner Shotski and powered home a 3 ¼-length winner.

Rice said the one-turn mile and an eighth should suit Max Player, who will again be piloted by Davis in the Belmont Stakes.

"Frankly, he's been a little green and inexperienced,” Rice said. “Maybe the one turn will actually be good for him with less negotiating of two turns. Obviously, he's won at two turns, but I think it will be helpful for him.

"It's going to be a strong race and all the best 3-year-olds in the country will be there, but it's in our backyard and we're going to give it a go. He's already won at a mile and an eighth, so we're not concerned about the distance."

Montauk Traffic, who captured the Jimmy Winkfield in February at the Big A for owner Chris Fountoukis, is currently taking some time off.

"He had a little inflammation in an ankle, so we decided to stop on him and give him a break," Rice said.

Everything's Cricket Racing and Lawrence Goichman's Nicodemus breezed five-eighths in 1:02.58 Thursday on the dirt training track. The 5-year-old Candy Ride horse, bred in Kentucky by WinStar Farm, was second last out in the Toboggan (G3) at the Big A.

"He's doing very well,” Rice said. “The Westchester was a flat mile last year – in the mud – and that worked out well for us.

"We'll nominate to the Carter, Westchester and First Defence and figure out what looks like the best opportunity. The best distance for him is probably the Carter, but it's going to be a very strong race."

Wicked Trick, a 5-year-old Kentucky-bred son of Hat Trick owned by Rice with Stephen G. Cooper, enjoyed a strong 2019 campaign winning five of nine starts. Rice said the gelding is under consideration for both the Carter and $150,000 True North (G2), a 6 1/2-furlong test slated for June 27.

"He's doing well,” Rice said. “We've nominated him to the Carter and True North and we'll give both of those some consideration.”

Darlene Bilinski and Harry Patten's New York-bred Prince of Pharoahs showed early promise with a five-length win at second asking in a one-turn mile in October at Belmont. The dark bay American Pharoah colt finished second in the one-mile Jerome on New Year's Day at the Big A but landed sixth when stretched out to nine furlongs in the Withers in search of graded black type.