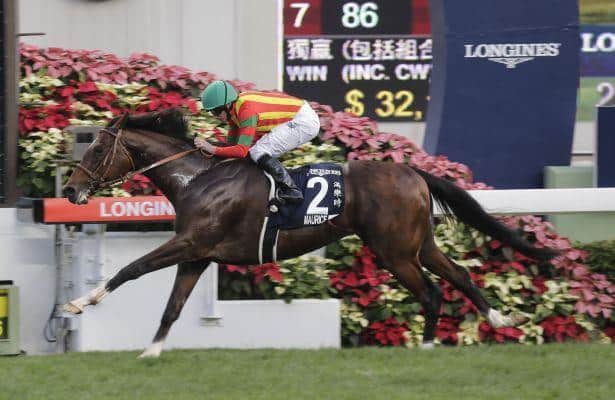 In doing so, he completed a Group 1 double on the day for trainer Noriyuki Hori and rewarded the coolest head at a heaving Sha Tin, big race pilot Ryan Moore.

Midway through the HK$25 million feature those who had placed their faith in Japan’s 2015 Horse of the Year would not have felt good about Maurice’s prospects.

While Yutaka Take opened up a significant break on the field aboard last year’s winner A Shin Hikari, Moore found himself three from the back and with no obvious route off the rail.

But turning for home eventual runner-up Secret Weapon drifted wide and Maurice loomed up to A Shin Hikari’s shoulder before cutting around him and storming to a quite breathtaking three-length victory.

Moore is rarely one to lose his head and – in comments reminiscent of John Oxx’s calm assessment following Sea The Stars’ troubled passage to Arc glory in 2009 – the recently-crowned LONGINES World’s Best Jockey said he was always confident in the horse underneath him.

“Fortunately there was good pace in the race and halfway down the back I thought it was setting up nicely for him and it was just a matter of finding the room,” said Moore, who was securing a second Cup following Snow Fairy’s success in 2010 and a 20th G1 score for 2016. “As soon as he got room and I put him into gear he just let down exceptionally well. He got to the leader early and then he was just easing up really. He has improved every time I’ve ridden him.”

As well as announcing the abundant talent of his trainer, Hori, to the wider world, Maurice enjoyed an international coming-of-age at this meeting 12 months ago.

Moore was in no doubt that this success – almost certainly the five-year-old son of Screen Hero’s final racecourse appearance – was another step forward in terms of performance and it will present plenty of late food for thought when the world’s official handicappers meet to decide the LONGINES World’s Best Racehorse later this week.

Asked what it felt like to be atop Maurice, Moore said simply: “It’s a lot of fun. Hori said to me on the way out, ‘Are you OK?’ and I told him ‘I’m always OK when I’m riding Maurice.’”

“He’s a brilliant horse. He is very good at a mile but he is possibly better at 10 [furlongs]. He has improved, he is a big strong horse and he has got better with racing. He has been a pleasure to ride.”

Hori became the first foreign-based trainer to record a Hong Kong International Races double, following Satono Crown’s late rally at the expense of the Moore-ridden Highland Reel in the Vase.

Typically he was keen to deflect any talk of his own personal glory.

“The horse, the jockey and the staff all tried very hard so it is a mutual effort and it feels great,” said Hori. “This horse really does seem to love Hong Kong but we get a lot of support from the Hong Kong Jockey Club including Mark Player and everyone who has helped us here and helped us get the horse to be his best. It is a team effort, Japan and Hong Kong together.”

Hori wouldn’t be drawn on whether Maurice has run his last race, teasing the gathered media in answer to questions of his stable-star’s imminent retirement.

“That’s what they have been writing in the newspapers anyway,” he said.

Secret Weapon gave home fans plenty to cheer with a career best three lengths back in second, a performance which can be upgraded given the fact he was checked in trying to get out from behind Lovely Day approaching the 200-metre mark.

Jockey Zac Purton said: “He has run a great race, he has come of age. He is Hong Kong’s best mile and a quarter horse now.”

Japanese-trained horses fought out a fierce battle for third with Staphanos getting the better of Lovely Day by a nose.

Christophe Soumillon only sat on Staphanos for the first time on Saturday morning and was delighted with the way that the Hideaki Fujiwara-trained five-year-old responded.

“It was a very good run,” said Soumillon. “At one stage I thought I would be fifth but he produced a great turn of foot to be third.”

The build-up to the race had been dominated by the prospective showdown between Maurice and A Shin Hikari and even halfway up the straight it still looked possible that Yutaka Take might have just enough horse to repeat last year’s solo effort, having been six lengths clear turning out of the back straight.

But as Maurice and his pursuers drew upsides, A Shin Hikari’s stride shortened and he faded late to beat only two home.

“He showed his race but it was a bit disappointing,” said Take of what is likely to be A Shin Hikari’s swansong.