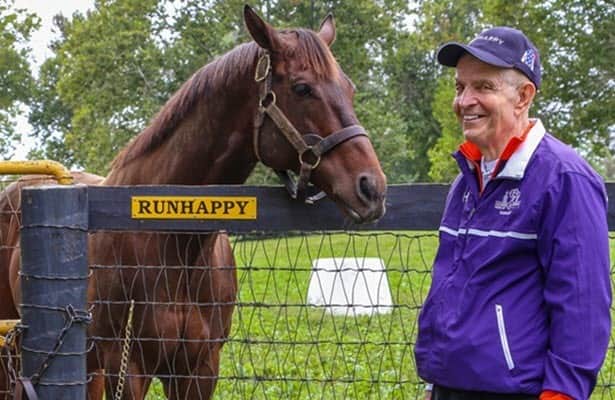 When the Kentucky Derby Future Wager’s second pool was announced, Smile Happy was installed as the individual favorite (behind the “all other 3-year-olds” option) at 8-1. The position made one of America’s most notable gamblers happy because of his ownership of the colt’s sire, Runhappy.

Jim McIngvale, better known as “Mattress Mack” because of his ownership of Gallery Furniture in Houston, put $10,000 on Smile Happy in the first pool of the KDFW. He said he plans to do similar for Pool 2, which opens Friday.

“I’ve got to support my boy.” McIngvale told Horse Racing Nation. “I’ve to support the great Runhappy and support Smile Happy. I’m looking forward to that.”

Smile Happy, trained by Kenny McPeek, has won both of his starts so far, including the Kentucky Jockey Club (G2) on Nov. 27 at Churchill Downs. In that race, McPeek also entered the morning-line favorite, Tiz The Bomb, but he had to scratch.

The Runhappy colt more than made up for the disappointment, taking the lead near the eighth pole and drawing off for the win. McIngvale said he thought Smile Happy could be a true Kentucky Derby contender.

“Kenny thinks he has (a chance), and I put a lot more credence in Kenny’s opinion than mine,” McIngvale said. “If Kenny thinks he’s legit and the owners think he’s good, then he’s good with me.”

McIngvale has had a tough time of late with his gambling, which he offsets with promotions at his furniture stores. Just in the past week, he lost bets on both the Alabama Crimson Tide, who lost to Georgia in the College Football Playoff championship, and a Super Bowl future wager on the New England Patriots, who lost in the NFL playoffs.

McIngvale said he plans to make another Super Bowl bet, though he was unsure which team he would support. Despite what is sure to be a large wager there, he had another sporting feat in focus.

“I’m more interested in a Runhappy winning the Kentucky Derby,” McIngvale said. “That would be the bigger thrill.”

Even beyond the obvious win at the window, a Derby win could be a boon for McIngvale, bringing increased stallion prospects for Runhappy.

“Super Saver (Runhappy’s sire) was a Derby winner and if Runhappy sired a Derby winner, that would be tremendous for his opportunities,” McIngvale said.

The second pool of the Kentucky Derby Future Wager will begin Friday at noon EST.