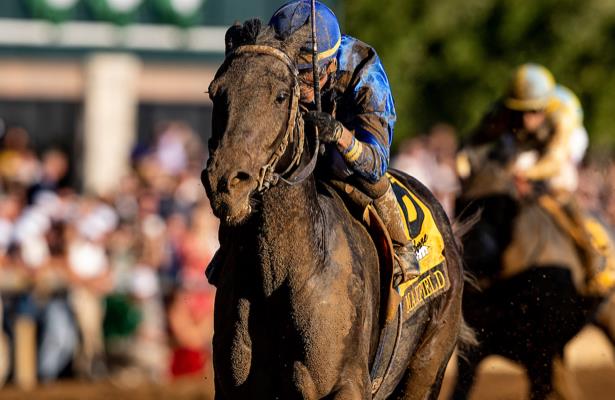 The Road to the 2020 Kentucky Derby has a new stop Saturday at Churchill Downs, three weeks after the Run for the Roses' traditional date under the Twin Spires.

The Grade 3, $150,000 Matt Winn Stakes at 1/16 miles has seen recent winners such as Gun Runner, McCraken and Tapiture -- all horses that exited the Derby. This year, it could land its winner a spot in the field the first Saturday in September with points paying out on a sliding scale of 50-20-10-5 to the top-four finishers.

Flap Jack is the only other horse in the race with a stakes win to his name. He took the Arlington-Washington Futurity on synthetic at Arlington Park last September but hasn't won since.

Speedy Ny Traffic hit the board at Fair Grounds in the Louisiana Derby (G2) in his latest effort as well as the Risen Star (G2) two back. Major Fed for trainer Greg Foley and Attachment rate for Dale Romans will be local favorites, as both trainers are Louisville mainstays.

Note the scratch of Mystic Guide who, as with Maxfield, is campaigned by Godolphin, which will keep the two separated for now.

The TimeFormUS Pace Projector expects them to go fast early in the Matt Winn with Ny Traffic and Celtic Striker looking for the front. Morning line favorite Maxfield sees them all based on this projection, but it's also factoring in his slow breaks at age 2. Can he get away from the gate quicker this time around?

America's Day at the Races, produced by the New York Racing Association in partnership with FOX Sports, is now the exclusive broadcast home of the Churchill Downs spring meet, which will include 26-days of live racing and runs through Saturday, June 27.

This week's America's Day at the Races broadcast will be highlighted by "Stephen Foster Preview Day" on Saturday. The stakes-laden card features five added-money races led by  the Matt Winn.

The card includes a trio of Pick 4 and Pick 5 wagers along with the 20-cent Single 6 Jackpot. The late Pick 5, comprised of all stakes, offers a $500,000 guaranteed pool.

Maxfield, a 3-year-old homebred colt by Street Sense, has been on the sidelines since his 5 ½-length score in the Breeders’ Futurity in early October. Trained by Brendan Walsh, Maxfield was one of the likely favorites for the $2 million Breeders’ Cup Juvenile but was forced to scratch because of a minor issue in his right front leg.

“The biggest difference we have all noticed with him from last year to this year has been his physicality,” Walsh said. “We never really questioned what he was like mentally but you can tell when we got him back to training he’s really filled out physically.”

Jose Ortiz, who has worked Maxfield at Keeneland prior to the Matt Winn, will be in the saddle on Saturday.

“Jose worked him from the gate two works ago and he broke very sharply,” Walsh said. “We never really expected to have those gate issues last year but I’m hoping those are behind him now.”

“Hopefully we will finally get lucky with a good trip,” Foley said. “He ran two really hard races in the Risen Star and the Louisiana Derby. We just got a little bit unlucky with our trips."