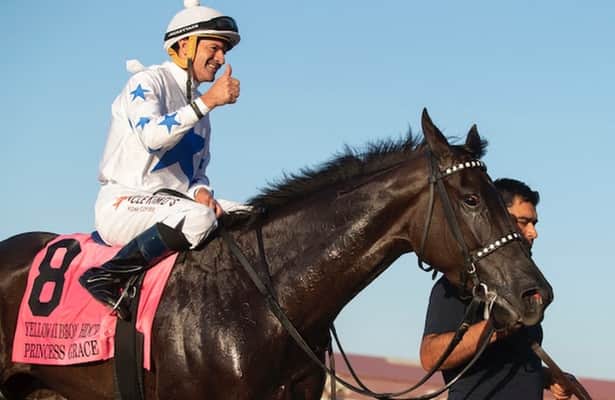 An eastern contingent has traveled to the shores of the Pacific Ocean in hopes for a Grade 1 win.

Of the six runners competing in the Matriarch, four are invaders to Southern California. Princess Grace runs for the Mid-Atlantic-based Michael Stidham, Regal Glory (9-5) and Viadera (5-2) represent top New York trainer Chad Brown, and Zofelle (5-1) is trained by the Kentucky-based Brendan Walsh.

Eastern trainers have won each of the last five editions of the Matriarch, which is the final Grade 1 turf event of the year for older fillies and mares. Brown delivered three of those victories and wheels back 2020 heroine Viadera.

The 5-year-old Bated Breath mare Viadera won last year’s Matriarch by a nose over stablemate Blowout, then did not return to the starting gates until August. She is 1-for-3 in 2021, with her win coming at Saratoga on Aug. 28 in the Ballston Spa Stakes (G2).

Princess Grace scratched out of that star-studded edition of the First Lady, then finished third as the 11-10 favorite Nov. 6 at Del Mar in the Goldikova Stakes (G2). The two-time Grade 2 winner goes for her first Grade 1 score Sunday under jockey Kent Desormeaux.

Zofelle, a Grade 3 winner, crossed one spot ahead of Princess Grace three weeks ago in the Goldikova.

Looking to the local hopes, Bodhicitta owns a graded score at Del Mar from the 2020 Yellow Ribbon Handicap (G2), while Fast Jet Court has yet to hit the board in three North American starts.

Here is a look at the field for the 2021 Matriarch Stakes (trainer and jockey in parentheses) with morning-line odds:

Here is at other graded stakes taking place Sunday across North America. All post times are EDT.

Chateau (5-2) looks for his second career graded stakes score in career start No. 38. Rob Atras trains the 6-year-old Flat Out gelding, who will have jockey Kendrick Carmouche aboard Sunday over a track where he won the Tom Fool Handicap (G3) on March 6. Sir Alfred James (3-1) wheels back less than two weeks after winning an allowance race Nov. 17 at Churchill Downs for trainer Norman Cash. Chad Summers trains Wendell Fong (4-1), a stakes winner who tries to make the grade in this spot.

The Minkster (3-1) aims to improve to 3-for-3 for trainer Daniel Vella. Jockey David Moran gets the call on the English Channel colt, winner of Woodbine’s Coronation Futurity on Oct. 30. Attard trains Hicksy (4-1), who tries graded company after taking the local Display Stakes. Casse trainee God of Love (5-1) is another Woodbine stakes winner, having scored in the Cup and Saucer.