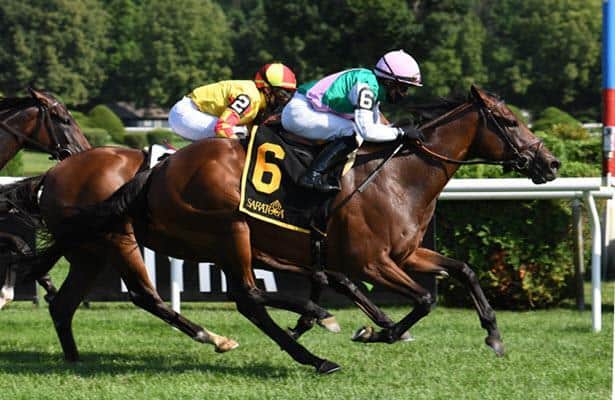 The final day of Del Mar’s 2020 racing schedule features a contentious Grade 1 affair over the lawn.

Nine fillies and mares will square off Sunday in the Grade 1, $300,000 Matriarch Stakes. Post time for the turf mile is scheduled for 6:56 p.m. ET.

Trainer Chad Brown has three runners entered in the Matriarch, including 7-2 morning-line favorite Viadera. Joel Rosario gets the call on the 4-year-old Bated Breath filly, who beat stablemate Blowout by a neck in September at Belmont Park in the Noble Damsel Stakes (G3).

Blowout and Tamahere (both 4-1) also will bid to give Brown his third Matriarch triumph in the last four seasons. The trainer has collected 10 Grade 1 victories in 2020, nine of them coming on turf.

Other runners to watch include Sharing (5-1), the 2019 Breeders’ Cup Juvenile Fillies Turf heroine for trainer Graham Motion. She will look to put the finishing touches on a 3-year-old season that included a runner-up finish at Royal Ascot.

Here is a look at the 2020 Matriarch Stakes field (trainers and jockeys in parentheses) with morning-line odds:

No jockey has been more successful lately in the Matriarch than Joel Rosario, who has won the event with Uni (2018), Off Limits (2017), La Tia (2014) and Gypsy’s Warning (2010). The New York-based Rosario has the mount Sunday on morning-line favorite Viadera.

Speaking of Rosario, Padraic Manocchio included him this week in his list of the 20 most reliable jockeys of 2020. Fellow Matriarch riders Manny Franco, Juan Hernandez, Irad Ortiz Jr., Flavien Prat, Umberto Rispoli and Mike Smith also made the cut.

Two of J. Keeler Johnson’s watch list horses, Maxim Rate and Tamahere, are in action Sunday in the Matriarch. He sees the former as progressing in the right direction, while the latter has a “brilliant turn-of-foot” that can lead to a victory.

The Matriarch is second of two Grade 1 turf events on Del Mar’s closing weekend. In the first, Domestic Spending got up late under Ortiz to win the Hollywood Derby on Saturday for trainer Chad Brown.

First post Sunday is 3 p.m. EST, with full Del Mar entries available via HRN. The Matriarch is the ninth of 10 races carded on closing day at the Southern California oval.

Here is a look at some of the other events that will take place Sunday at Del Mar:

Got Curly is the 7-2 morning-line favorite for trainer Philip Oviedo and jockey Mario Gutierrez. The Super Saver colt ran fourth on debut in October at Santa Anita, then second later last month at Del Mar, and makes his third start here. The 5-1 second choice is Phil D’Amato trainee Cathkin Peak in his North American debut after making his only previous start in Ireland.

3-year-old Pioneerof the Nile colt Anaconda did not debut until earlier this month at Del Mar but did so with a three-length victory. The Richard Mandella trainee now faces winners for the first time and is the 7-2 morning-line favorite. Jockey Drayden Van Dyke gets the call. Next at 4-1 are Maestro Dearte for trainer Peter Eurton and Shadow Sphinx for the barn of Mark Glatt.

Trainer Brad Cox saddled three winners Saturday on Churchill Downs’ closing day and now looks to impact Del Mar’s final 2020 racing afternoon with Juliet Foxtrot in the Matriarch and Royal Prince in this event. The Cairo Prince colt is the 7-2 morning-line favorite in this test for 2-year-olds. Joel Rosario will pilot Royal Prince, who won going 1 1/16 miles on turf in October at Keeneland on second asking. The 9-2 second choice is Graham Motion-trained Wooten Asset, who won his first two races in Europe but has not found the winner’s circle since coming to the U.S.

Lauren Squared is the 3-1 morning-line favorite for her first start against fellow California-bred, 2-year-old fillies. Peter Miller trains the Square Eddie filly, a Williamson Racing homebred who Flavien Prat will ride Sunday. Next at 5-1 is Big Stretch, who makes a fourth attempt at a first victory here for D’Amato.

Chad Brown went to the Bobby Frankel School of Thoroughbred Training. The late Hall of Famer, who left us in 2009, was a demanding teacher — tough taskmaster might be the better term — and insisted on the very best from his students.

By now it is obvious to all that Brown, the 41-year-old who grew up in a little town in upstate New York that is just a hop and a skip from Saratoga, graduated with honors from BFSTT and has gone on to several advanced degrees. There are more than a few who’d argue that he’s currently the best horse conditioner in the country. (His four straight Eclipse Awards — 2016-19 — for training speak to that.) And when it comes to training horses to run well on the turf, those more than a few become a landslide more than a few.

Del Mar fans can testify to Mr. Brown’s abilities, too. In recent years at the shore oval, he’s won nine stakes (seven of them Grade 1s), most recently in Thursday’s grassy Red Carpet with Orglandes. For Sunday’s big finale card of the 15-day Bing Crosby Season, Brown has shipped in not one, or two, but three high-caliber fillies to test their mettle in the Grade 1, $300,000 Matriarch Stakes at one mile on the Jimmy Durante Turf Course that headlines the 10-race program.

Additionally, it is noted that Brown is no stranger to the Matriarch. He won it in 2017 with Off Limits and again in 2018 with Uni.

Eight of the nine Matriarch runners are stakes winners already. Six of them come in off stakes victories in their most recent start; a pair of them are Grade 1 winners already, while three others are Grade 1-placed. Together they’ve earned more than $3.3 million in purses. It is, most certainly, a stellar field.

Besides Brown’s crew, both Juliet Foxtrot and Sharing deserve serious consideration in what will be the seventh local running of the stakes, though the 39th edition overall (the other runnings were held at the late, great Hollywood Park).

Juliet Foxtrot, a 5-year-old by Dansili and the only mare in the field, finished third in last year’s Matriarch behind Got Stormy. The British-bred bay comes into the mile off a tally in the Gallorette Stakes at Pimlico on Oct. 3. She trains out of the barn of Brad Cox.

Sharing came home first in the Edgewood Stakes on grass at Churchill Down on Sept. 4 in her most recent effort. She’s a 3-year-old filly by Speightstown who has won five of her seven starts for trainer Graham Motion.