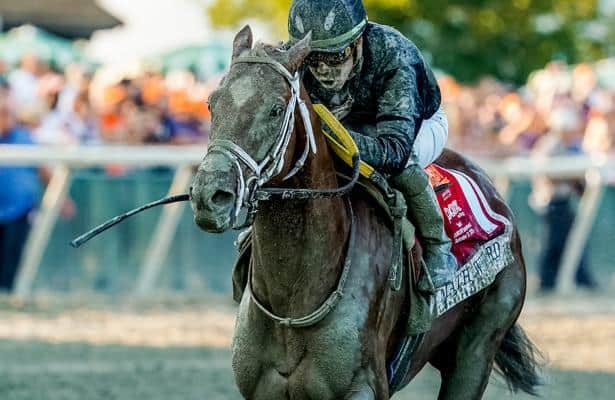 Grade 1 winner Math Wizard, unraced since a ninth-place finish in the Pegasus World Cup (G1) in January, could make a return at Saratoga on Friday.

The 5-year-old horse, who gave trainer Saffie Joseph Jr. his first Grade 1 win in the 2019 Pennsylvania Derby, is a main-track-only entrant in the sixth race, a $105,000 allowance at 1 1/2 miles on the turf. The National Weather Service forecasts a 30 percent chance of rain, so it might be a bit longer before he makes his return.

The Pennsylvania Derby is the last time Math Wizard won a race, and it was followed by a fifth-place finish in the Breeders' Cup Classic. In 2020,  he posted a record of 6: 0-2-0, with that second-place finish coming in the Monmouth Cup (G3).

In Friday's race, Math Wizard is the morning-line favorite, at 2-1, and he would have Irad Ortiz Jr. aboard should the race be rained off the turf. The two second choices, at 3-1, are Ajourneytofreedom, who finished third in the Belmont Gold Cup (G2) on June 24, and Dack Janiel's, also a main-track-only entrant, who is coming off a win in an allowance race at Saratoga on July 15.