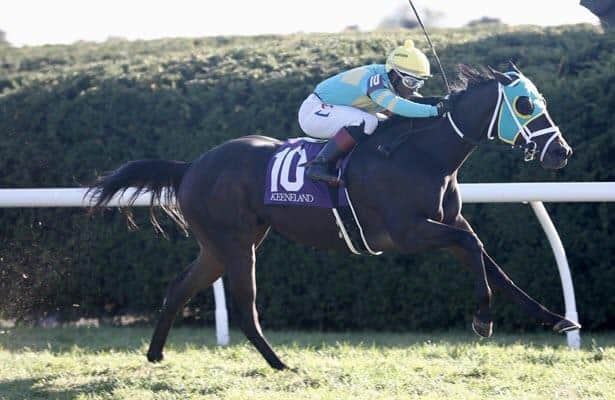 Marzo, who was claimed by trainer Mike Maker for $62,500 two starts back at Kentucky Downs, provided a handsome reward to the new connections with a victory in the Grade 3, $150,000 Sycamore Stakes at Keeneland on Thursday.

Marzo was ridden by Ricardo Santana Jr. as a replacement for the recently injured Florent Geroux. Marzo and Santana Jr. were forwardly placed throughout the 1 1/2-mile turf contest. They angled out leaving the final turn and then sprinted to the wire to score a 1 1/4-length win.

Nakamura was next across the wire in second and was followed by Postulation. Focus Group, who was bet down to the even-money favorite for trainer Chad Brown, was well-back throughout and finished a disappointing sixth.

“The horse broke really sharp," Santana said. "I stuck him behind the pace. The horse traveled really good. I was really happy with his position. At the three-eighths pole, he was pulling, saying ‘let me go.’ I let him go.”

"We claimed him with this idea to stretch him out and with this race in mind," Maker said.

A 4-year-old son of Medaglia d'Oro, Marzo was third when claimed at Kentucky Downs and returned to finish second in an optional-claiming event at Churchill Downs on Sept. 26. Last year, Marzo was graded-stakes placed routing on the grass.

A $140,000 auction purchase at the 2019 Keeneland January Sale, he is owned by Three Diamond Farms. This is the first stakes win for Marzo, who has now won four of 16 starts with four seconds and three third's. The $90,000 winner's share of the Sycamore pushes his earnings to more than $263,527.