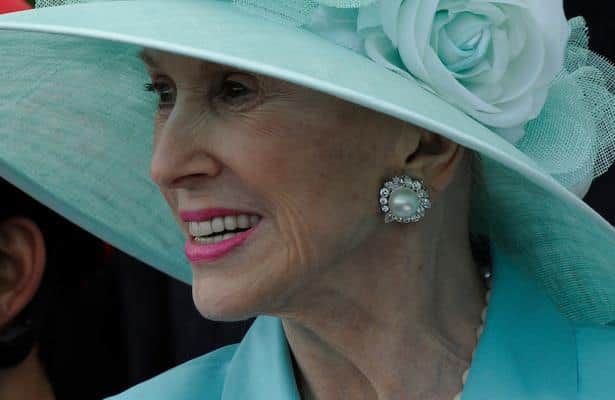 Marylou Whitney, whose philanthropic initiatives and contributions to racing earned her the nickname "Queen of Saratoga," among other honors, died Friday, July 19, at her Cady Hill home in Saratoga Springs, N.Y. She was 93.

For seven decades, Mrs. Whitney was among the most successful owners in thoroughbred racing. She married Cornelius Vanderbilt "Sonny" Whitney, one of the founders of the National Museum of Racing and Pan American Airlines, respectively, in 1958. Their stable embarked on a winning tradition, with Tompion capturing the Travers in 1960 and Chompion winning the Mid-Summer Derby in 1968.

The family's contributions to racing went beyond trips to the winner's circle. In the 1970s, the Whitneys helped convince the New York Racing Association to keep Saratoga Race Course open as a viable part of its racing calendar at a time when wagering and attendance sagged. Their efforts and long-term vision continue to benefit racing, with the Saratoga meet attracting more than one million fans annually.

"Marylou's passion for racing was only matched by her love for the City of Saratoga Springs and her support for the backstretch community," said NYRA CEO & President Dave O'Rourke. "Her generosity was unparalleled and the list of her contributions is endless. Saratoga would not be the destination it is today without the esteemed leadership, dedication and support of Marylou.

"Marylou's love of this sport and city will have a lasting impact on generations to come."

Beyond racing, the Whitneys made a huge impact in the Saratoga community, founding the Saratoga Performing Arts Center, which opened in 1966 and continues to host world-class musical and dance performances to this day, helping turn Saratoga into a true summer destination for tourists.

Following C.V. Whitney's death in 1992 at age 93, Whitney opened her own stable, which garnered industry-wide acclaim with her Eton blue and brown silks quickly becoming synonymous with racing excellence. In 2003, Bird Town, trained by Nick Zito, made Whitney the first woman in 80 years to own and breed a Kentucky Oaks winner. Whitney and Zito continued to make history in 2004 when Birdstone won the Belmont Stakes, ending Smarty Jones's Triple Crown bid, and then winning the Travers just before a massive rainstorm pelted Saratoga.

In all, Marylou Whitney Stables earned nine graded stakes victories and campaigned more than 190 winners from 2000-2019.

Born Marie Louise Schroeder on December 24, 1925, Whitney grew up in Kansas City, Missouri. The daughter of Harry Schroeder, an accountant who had attended law school with Harry Truman, and mother Marie Jean, Mrs. Whitney had an active childhood in which she was a member of Troop 44 of the Girl Scouts of America.

After graduating Southwest High School, she attended the University of Iowa for a time before working as an actress, appearing in movies and television shows. Her work in radio also brought her acclaim, highlighted by the show "Private Smiles" on KCKN, catering to service members during World War II.

In 1994, Mrs. Whitney met John Hendrickson, who was working as an aide to Alaska's then-governor Wally Hickel. They married in Alaska in 1997, and the couple continued their philanthropic endeavors, serving as founding members of the Thoroughbred Retirement Foundation and as founders of the Markey Cancer Center in Lexington, Kentucky.

Whitney continued to make her mark beyond the scope of the racetrack itself, facilitating with her husband, John, the Saratoga Backstretch Appreciation program to help stable workers who are away from home during NYRA's Saratoga summer meet.

Whitney was presented with an Eclipse Award of Merit in 2010 for her contributions to racing. She was elected to the Jockey Club in 2011. Other honors among a long litany include the moniker "First Lady of the Kentucky Oaks" in 2015 for her charitable works.

As an indelible part of Saratoga's history, the Whitney legacy can be seen all over the City of Saratoga Springs, including along famed Union Avenue outside of Congress Park where in 2015 Whitney and Hendrickson gifted a statue of Native Dancer that has become a landmark at the start of the street where the famed racetrack sits. That same year, NYRA enshrined Whitney in the Saratoga Walk of Fame, where the most legendary trainers, jockeys and owners in the Spa's rich history are honored.

In 2018, Whitney was in attendance as the Racing Hall of Fame inducted three generations of Whitneys as Pillars of the Turf, including Sonny, his father, Harry Payne Whitney, and his grandfather Williams Collins Whitney, who purchased Saratoga Race Course in 1900 and helped create Belmont Park.

Whitney is survived by her husband and her five children: Louise "M'Lou", Frank "Hobbs", Henry "Hank," Heather and Cornelia.

Our hearts are broken, we are deeply saddened by the passing of Marylou Whitney at the age of 93. The Queen of Saratoga was one of racing's most dedicated supporters and a tremendous ambassador for the industry. We send our condolences to her family and friends... pic.twitter.com/leQbZJ7z5F

That was one of the most difficult announcements I’ve ever had to make. Thank you for everything Mary Lou Whitney. You were truly the Queen! @TheNYRA

We have lost an absolute treasure in Marylou Whitney. No proper words can do justice to what she meant to this industry and to all who knew and loved her. She was royalty in every sense. R.I.P.

After enough time around these parts, the fan in you dissolves and everybody just becomes another person. Everybody, that is, except Marylou Whitney. When you have the chance to take your picture with such a titan, you do it. Thank you, Marylou. pic.twitter.com/RbnvLZX90r

Some people, you think will live forever. Marylou Whitney was one of those, a part of the fabric of horseracing and of Saratoga in particular. She was an institution by name and by deed.

Such sad news to hear the announcement of the passing of the amazing Marylou Whitney at 93. "The Queen of Saratoga" was a passionate champion of horse racing and particularly of Saratoga Springs. She is the last of a grand era in the sport and the community. RIP.

Saratoga and horse racing lost a true icon today! Marylou was a real life princess to me. I’m so blessed we got to celebrate two Whitney wins with her. I’ll have a steak on a rock at Prime and some ice cream in her honor. RIP Marylou Whitney pic.twitter.com/9IlWpGfhtl