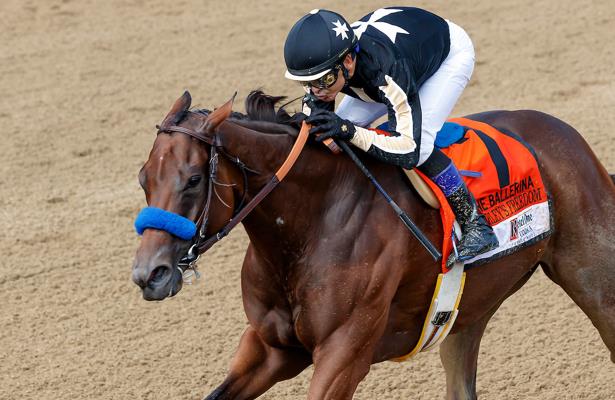 Defending champion Marley’s Freedom and the streaking Danuska’s My Girl head a field of seven entered in the Grade 2, $200,000-guaranteed Great Lady M. Stakes on Saturday at Los Alamitos.

Trained by Hall of Famer Bob Baffert for Cicero Farms LLC, Marley’s Freedom won the 2018 Great Lady M. by 1 ½ lengths as the prohibitive 1-5 favorite, defeating a field that included, among others, defending champion Skye Diamonds.

A 5-year-old daughter of Blame and the Formal Gold mare Relaxing Green, Marley’s Freedom is 8-for-17 with earnings of $1,113,935. She returns to Southern California after finishing second as the 9-10 choice behind the talented Mia Mischief in the Humana Distaff (G1) on May 4 at Churchill Downs.

The 5-year-old daughter of Shackleford and the Dayjur mare Amaday ended 2018 with a 9-1 upset in an optional claimer last Nov. 23 at Del Mar, then was perfect in three tries this year at Santa Anita.

After an optional claiming win at one mile Jan. 11, Danuska’s My Girl cut back in distance to win a pair of Grade 3 sprints – the Las Flores when 20-1 April 7 and the Desert Stormer – as the 9-10 favorite on May 19.

A close third – beaten by a neck – when 31-1 in the Breeders’ Cup Filly and Mare Sprint last Nov. 3, Anonymity will make her 5-year-old debut for LNJ Foxwoods and Hall of Fame trainer Richard Mandella.

A daughter of Tapit and the Sir Cat mare Stormy Sunday, Anonymity has won three of seven and earned $252,200. She has yet to finish worse than third and has trained well for her return.

Like Anonymity, Show It N Moe It will be making her first start at Los Alamitos for a partnership that includes Tom and Sally London, Eugene Zondlo and breeder Terry Lovingier.

A 4-year-old Grace Upon Grace filly out of the Ide mare Robotica, Show It N Moe It has won six of 21 and banked $467,604 for trainer Gary Sherlock. She finished second, a half-length behind Danuska’s My Girl in the three-horse Desert Stormer.

Baffert also entered Just a Smidge. A gray Into Mischief filly out of the Tapit mare Pooh Corner, the 4-year-old, who is owned by Debbie Lanni, is 3-for-13 with earnings of $157,546.

The $425,000 2-year-old purchase is cutting back in distance after finishing third in the Santa Maria (G2) on June 1. She is 1-for-1 at Los Alamitos, winning an optional claimer at one mile last Sept. 14.

Yuvetsi, who trailed in the Desert Stormer in her 2019 debut, returns to Los Alamitos for the first time since finishing second behind Stealth Drone in an optional claimer Dec. 1, 2017 for Hronis Racing LLC and trainer John Sadler.

A 5-year-old Bodemeister mare, Yuvetsi has won four of 15 and will be seekin her second graded stakes success, having captured the Rancho Bernardo Handicap (G3) last Aug. 12 at Del Mar.

Out of the Speightstown mare Mother Ruth, Yuvetsi has banked $253,930.

Exuberance shortens up for trainer Ian Kruljac after finishing fourth in the Santa Maria, 3 ¾ lengths behind Just a Smidge.

A 4-year-old Archarcharch filly out of the D’wildcat mare Wild Forest Cat, Exuberance has won twice in 14 outings and earned $220,681 for Seltzer Thoroughbreds.