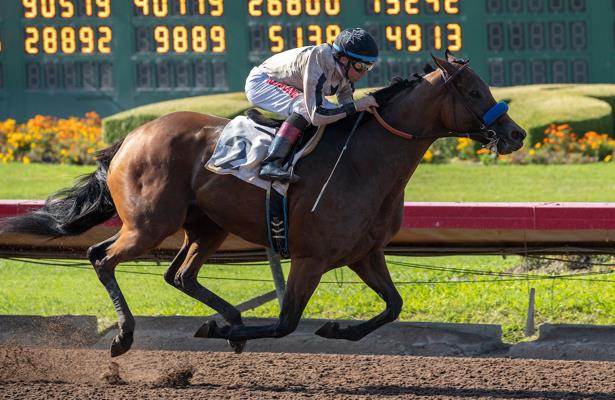 Heavily-favored Marley's Freedom made it back-to-back wins in the Grade 2, $200,351 Great Lady M. Stakes on Saturday at Los Alamitos.

The 3-5 choice in the field of six, the 5-year-old daughter of Blame and the Formal Gold mare Relaxing Green was reserved off the early pace by jockey Drayden Van Dyke, found room to rally between horses around the turn, got the lead inside the final quarter of a mile and went on to score by 1 3/4 lengths.

MARLEY'S FREEDOM broke at the back of the pack and looked disinterested the first half of the race. At the top of the stretch DRAYDEN VAN DYKE made the move by splitting horses to spurt out front to win the GREAT LADY M going away!! pic.twitter.com/qk3CQH1bpY

The victory for the six-time graded stakes winner ended a brief two-race losing streak. She had finished second in the Beholder Mile (G1) on March 30 at Santa Anita and was runner-up as the 9-10 favorite in the Humana Distaff (G1) on May 4 at Churchill Downs prior to Saturday.

“We were hoping she would run like that,'' said Baffert, who has now won three of the six runnings of the Great Lady M. at Los Alamitos. “When (Van Dyke) asked her to go he had a lot of horse.

“I really thought she would run better last time at Churchill Downs, but (jockey) Mike Smith said she struggles on that surface. A lot of horses are weird on that surface.

“I like coming here. Los Alamitos has a great surface and it is fair. Horses can win on the lead or from off the pace.''

Baffert indicated Marley's Freedom would surface next in the Aug. 24 Ballerina (G1) on Travers Stakes day at Saratoga. The Kentucky-bred won that event a year ago by 3 ¼ lengths as the 19-10 favorite.

“She broke well and it worked out perfectly,'' said Van Dyke, who has been aboard for five of Marley's Freedom's victories. “She was fine tuned to put in a big race. It was nice to win this two years in a row.''

Anonymity, the 5-2 second choice making her first start since finishing third in the Breeders' Cup Filly & Mare Sprint last Nov. 3 at Churchill Downs, completed the exacta and paid $2.80 to place.

The 5-year-old Tapit mare finished 1 ¼ lengths in front of Exuberance, who rallied from last as the longest shot in the field at 65-1.

Pacesetter Danuska's My Girl, who had her win streak snapped at four; Show It N Moe It; and the Baffert-trained Just a Smidge completed the order of finish. Yuvetsi was scratched Saturday morning.