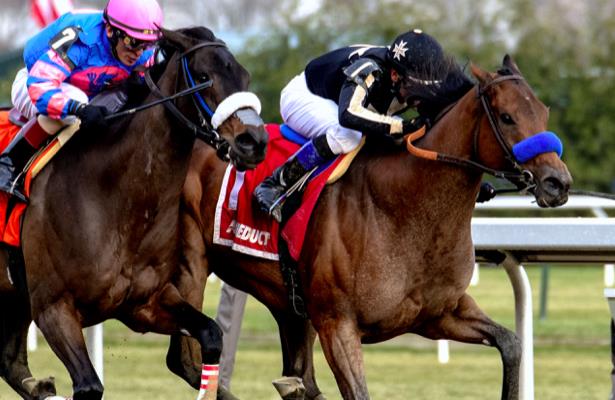 Defending winner Marley’s Freedom, streaking Danuska’s My Girl and comebacking Anonymity are among a dozen fillies and mares nominated to the Grade 2, $200,000 guaranteed Great Lady M. Stakes at Los Alamitos.

Contested at 6 ½ furlongs, the Great Lady M. will be run for the sixth time Saturday at Los Alamitos.

Owned by Cicero Farms LLC and trained by Hall of Famer Bob Baffert, Marley’s Freedom won the 2018 renewal by 1 ½ lengths as the 1-5 favorite, defeating a field that included, among others, 2017 heroine Skye Diamonds.

A 5-year-old daughter of Blame and the Formal Gold mare Relaxing Green, Marley’s Freedom has won eight of 17 and earned $1,113,935. She was second behind Mia Mischief in the Humana Distaff (G1) on May 4 at Churchill Downs in her third start of 2019.

Trained by Hall of Famer Jerry Hollendorfer for Bad Boy Racing LLC, Danuska’s My Girl is perfect in three starts this year after ending 2018 with a decisive victory last Nov. 22 at Del Mar.

A 5-year-old daughter of Shackleford and the Dayjur mare Amaday, Danuska’s My Girl will be trying Grade 2 company for the first time after consecutive Grade 3 victories in the April 7 Las Flores and May 19 Desert Stormer at Santa Anita. She is 5-for-14 with a bankroll of $258,810.

Idle since finishing third, beaten by a neck, at nearly 32-1 in the Breeders’ Cup Filly and Mare Sprint last Nov. 3 at Churchill Downs, Anonymity will be seeking her fourth victory for LNJ Foxwoods and Hall of Fame trainer Richard Mandella.

The 5-year-old Tapit mare has earned $252,200. Anonymity, who is out of the Sir Cat mare Stormy Sunday, will be making her Los Alamitos debut if she participates in the Great Lady M.

The other nominees are Donut Girl, Exuberance, Just a Smidge, Princess Dorian, Show It N Moe It, S Y Sky, Uno Trouble Maker, who has won four in a row for trainer Bill Spawr, Yuvetsi and Zusha.

Entries for the Great Lady M. will be taken Wednesday.