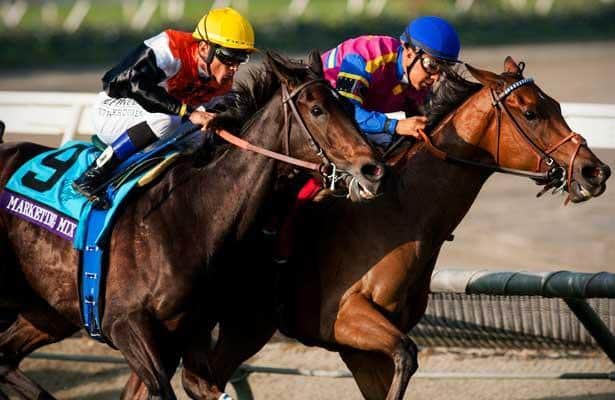 Craig Bernick said he wants to test his family’s Marketing Mix on an international level, and the mare will get that chance as the 5-2 morning line favorite against eight others in the Grade I $750,000 Beverly D. Stakes as part of the International Festival of Racing on Saturday at Arlington International Racecourse.

Marketing Mix, who races in the black and orange colors of Glen Hill Farm, finished second last year, and Chicago native Bernick said he wants to win this race as the start to an international campaign that could include tilts in the Grade I Breeders’ Cup Turf and Group I Longines Hong Kong Cup. The Beverly D. is a Breeders’ Cup Challenge Win & You’re In race for the Breeders’ Cup Filly & Mare Turf, which Marketing Mix finished second in last year. Gary Stevens rides.

“We’ve had this race circled since after the Breeders’ Cup,” Bernick said of Marketing Mix’s runner-up finish to Zagora. “She was probably best in this race [the Beverly D.] last year. She had nowhere to go, had to shift wide at the eighth pole and was coming but just didn’t get there.

“We’d love to win this race in Chicago. My grandparents were both born in Chicago and met after the war. I grew up here, and came to appreciate the Million, Secretariat, and Beverly D. as legitimate international Grade I races. It takes a top-class horse to win these races, and hopefully ours gets the job done. She’s going great and we’re excited to run her.”

For the Beverly D., however, the international competition will come to Marketing Mix in the form of James Wigan’s Dank and Flaxman Holdings’ Duntle – both Group II winners – as well as Alan Spence’s improving Gifted Girl.

Ryan Moore, Wayne Lordan, and Thomas Queally all retain their mounts aboard Dank, Duntle, and Gifted Girl, respectively. Dank won the Group II Kilboy Estate Stakes last out after finishing third behind Duntle in the Group II Duke of Cambridge Stakes at Royal Ascot. Gifted Girl has raced just once at the group level, finishing third in the Group III Princess Elizabeth Stakes, but her two-length win over Ladys First in a Listed stakes last out puts her in Dank and Duntle’s class.

Another contender with local flare is Shadwell Stable’s homebred Ausus (James Graham), who won the local prep here 2¼ lengths to the good of Ramsey Stable’s Artemus Kitten and Hernandez Racing Club’s La Tia in the Grade III Modesty Handicap on July 13. Trainer Danny Peitz said the Invasor filly will have to improve “three or four lengths” to win and identified Marketing Mix as the horse to beat. Artemus Kitten (Rosie Napravnik) and La Tia (Kent Desormeaux) are also in the Beverly D., as are Jim and Susan Hill’s Solid Appeal (Joel Rosario) and Juddmonte Farms’ Starformer (Edgar Prado).

WGN-TV and WGN America will televise the Beverly D. live as part of its hour-long broadcast from Arlington that begins at 5 p.m. Central time. HorseRacingTV (HRTV) and the Horse Racing Radio Network (HRRN) will broadcast the race as well.