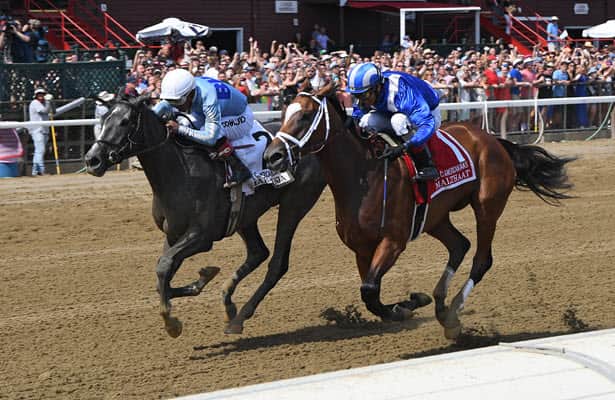 Maracuja, the longest shot on the board, ran down odds-on favorite Malathaat in deep stretch to win a thrilling edition of the Grade 1, $500,000 Coaching Club American Oaks at Saratoga on Saturday.

Dispatched at 14-1 in the four-horse field, Maracuja stalked the previously undefeated Malathaat through fractions of 23.38, 47.13 and 1:11.02 for six furlongs. As the field entered the stretch, Malathaat was able to dispatch of pace presence Clairiere, but rolling down the outside under Ricardo Santana Jr. was Maracuja. She and Malathaat commenced a one-on-one battle in the final furlong, with Maracuja prevailing by a head for trainer Rob Atras.

“The trip was perfect," Santana said.  "Rob liked the filly a lot and I was happy with her. There wasn’t much pressure in this race. He told me, ‘Just do what you have to do’ and we took the victory today."

The winning time for 1 1/8 miles on a fast track was 1:49.29. Clairiere checked in third with Rockpaperscissors completing the order of finish.

“When they turned for home, I thought we had a shot," said Atras, who earned his first Grade 1 win as a trainer. "It looked like we were definitely going to be second, but as the wire kept getting closer, she just really laid it down. That filly of Todd’s (Malathaat), I didn’t think we were going to get by her, to be honest.”

Maracuja, who paid $31.60, is owned by Beach Haven Thoroughbreds. She was a $200,000 auction purchase as a yearling. In her previous start, the daughter of Honor Code was beaten 7 1/2 lengths by Malathaat when splitting the field in the Kentucky Oaks.

“She was very good going into the (Kentucky) Oaks, she just broke a little flat footed and got shuffled back in the turn,” Atras said. “She really didn’t get a great trip that day and it wasn’t a true showing of her. She’s obviously improved a lot the past few months.”

“Sometimes when I’m 1-to-9 I don’t expect to win," Atras said of the long-shot win. "It’s never over until it’s over and as you can see, she needed every part of the mile and an eighth."