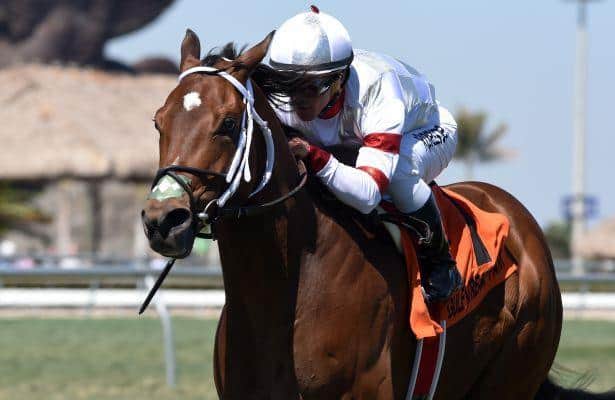 Manhattan Dan, who is undefeated in two starts over the turf course at Gulfstream Park, returns to action Saturday in the $125,000 Gulfstream Park Turf Sprint, where he will be saddled for the first time by trainer Todd Pletcher.

Manhattan Dan, a son of 2008 Florida Derby winner Big Brown, won two stakes at last year’s Championship Meet, the Texas Glitter and Fisher Island Handicap, and was under consideration for a trip to Royal Ascot, before he was injured and sent to the sidelines.

Pletcher said he likes what he has seen from the 4-year-old, who is a front-runner.

“We’ve had him for a little while,” Pletcher remarked. “He’s a really, really cool horse to train. He loves his job and he’s been training well and he’s obviously shown some good form from before and shown that he’s a high-quality turf sprinter. We didn’t want to be too creative, just going to stick to what he’s proven that he does well and hope we’ve got him ready to run a strong race off a fairly long layoff.”

Javier Castellano has the mount on Manhattan Dan, who drew post 2.

Australian-bred Power Alert, another front-runner, had a very lucrative 2016 season for his connections. The gelding won three of 10 starts, and finished in the top three on five other occasions. He won his prep for this assignment by drawing off to a 3 1/2-length victory in Tampa’s Turf Dash on Dec. 31.

Another intriguing runner in the field is the well-traveled Mongolian Saturday, the winner of the 2015 Breeders’ Cup Turf Sprint (G1). Unraced since finishing ninth in last year’s renewal of the Turf Sprint, the 7-year-old gelding won an allowance optional claiming race on the Gulfstream Park turf during the 2015 Championship Meet.

A field of 12 fillies and mares entered the $125,000 Ladies’ Turf Sprint. The five-race features several stakes winners, including Spectacular Me, who won the Claiming Crown Distaff Dash last month at Gulfstream Park, and Ruby Notion, the 2015 Colleen Stakes winner.