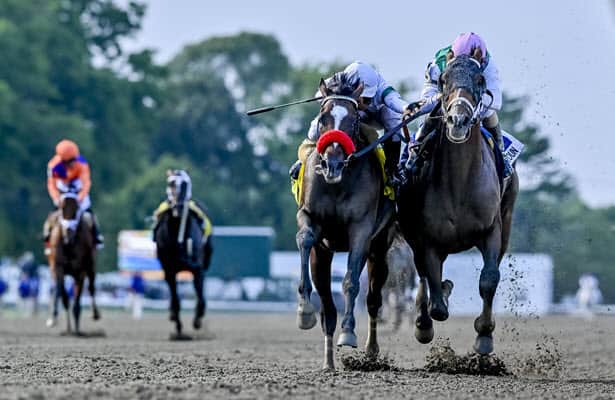 The Grade 1, $1 million Haskell Stakes was expected to be a match-up between the second-place finishers from the three Triple Crown races and the least experienced horse in the field of seven, Following Sea. Early on, that is exactly what happened.

However, the stretch run was far from expected when Hot Rod Charlie was making a closing move while racing four paths wide at the quarter pole. He took the lead with a furlong remaining under urging from jockey Flavien Prat. But then Hot Rod Charlie shifted paths in front of Midnight Bourbon, causing the Steve Asmussen runner to stumble badly and unseat jockey Paco Lopez.

Meanwhile, down the stretch, Kentucky Derby runner up Mandaloun had found room between horses turning for home while avoiding the incident between Hot Rod Charlie and Midnight Bourbon.

Racing to the wire, Mandaloun was on the inside of Hot Rod Charlie and they battled heads apart for the final sixteenth of a mile. At the finish, they were a nose apart with the photo favoring Hot Rod Charlie. But the stewards very quickly put up the inquiry sign.

The decision did not take long when considering the importance of the Haskell. Hot Rod Charlie was disqualified and placed last because Midnight Bourbon did not finish the race.

Midnight Bourbon seemed no worse for the wear as he gathered himself after the stumble and ran down the rest of the stretch.

Immediately after the race owner Ron Winchell said, “It looks like he walked off alright. He just tripped over the heels of the horse that came over on him. It’s bad luck in racing. It happens.”

Lopez was eventually able to get up and walk into the ambulance and was taken to the track first-aid station with what was reported to be soft-tissue injuries in his knee and ankle.

“I’m good man. I am fine. I am just going to ice it up,” Lopez said.  “My horse kicked me in the knee. I felt pain in my tendon there, and I couldn’t move my leg for about 10 minutes, but I am fine now I can bend my knee again. I think I would have won that race, I had my horse in the right position to win. I was fighting back, but my horse had a lot of run left, so I think I could have won that race.”

For his part Prat said, “I am really proud of (Hot Rod Charlie’s) effort. He just clipped my heels. That’s it.”

Prat did apologize to Lopez after the race, to which Lopez calmly responded, “It happens man.”

Ultimately the stewards acted, Mandaloun was elevated to first and Florent Geroux became the victorious rider.

“I had my sights on Hot Rod Charlie,” Geroux said. “When Hot Rod Charlie tipped out I decided to go inside. It was a very hard battle. Hot Rod Charlie was going to win by a neck and right at the end my horse came back and made it really close. Unfortunately for Hot Rod Charlie he came in and Midnight Bourbon clipped his heels and he got disqualified. I feel bad for the connections of Hot Rod Charlie because he ran a hard race and Flavien Prat is a good friend of mine. I kind of feel bad for him. Honestly, I didn’t know what happened until I came back and looked at the TV. It is not the best way to win, but Mandaloun ran a winning race and deserves this.”

Mandaloun joins Essential Quality as 3-year-olds in the barn of his trainer Brad Cox with coveted Grade 1 victories.

“We got a really good trip. I thought it was a lot like our Kentucky Derby trip,” Cox said. “He was saving ground. Florent did a good job of getting on the outside of Following Sea. Turning for home I thought we had a big shot at winning the race. I thought we ran a winning race. Didn’t have our nose down at the wire but all and all it worked out. I’m proud of the effort and the performance. He’s always been a good colt, he has always been highly thought of. He deserves a Grade 1 victory. He’s a Grade 1 horse and I’m glad it worked out today.

In the end Mandaloun notched his fifth win from eight career starts with earnings of $1,651,252. In addition, he got a “Win and You’re In” spot in the starting gate for the Breeders’ Cup Classic which is worth $150,000.

Mandaloun was the 3.10-1 second choice behind the 4-5 favorite Hot Rod Charlie. Mandaloun paid $8.20 to win. The early pacesetter Following Sea ended up as the second-place finisher more than 18-lengths behind the winner. At 56-1 Antigravity was the official third-place finisher.

Looking ahead to the rest of the year for his 3-year-olds, Cox said, “Both (Essential Quality and Mandaloun) have obviously been campaigned since last fall and all of 2021. We’re going to ship Mandaloun up to Saratoga and let him catch his breath. We’ll catch our breath. Myself and Garrett (O’Rourke, Juddmonte General Manager) will come up with a game plan in the near future. No need to make a decision now.” 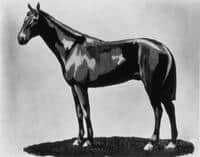