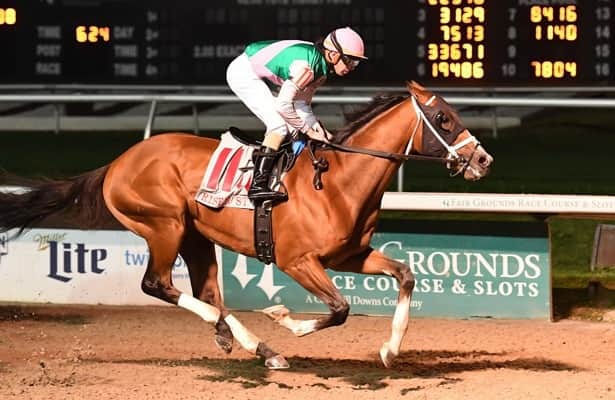 Mandaloun is a split-sample drug test away from being declared official winner of the 2021 Kentucky Derby.

The Into Mischief colt finished second May 1 at Churchill Downs, crossing a half-length behind Medina Spirit after a stretch battle.

Churchill Downs subsequently announced it has suspended Baffert from racing at the track. The organization also addressed how the positive test will affect the official Kentucky Derby results.

“The connections of Medina Spirit have the right to request a test of a split sample and we understand they intend to do so,” a Churchill Downs news release said. “To be clear, if the findings are upheld, Medina Spirit’s results in the Kentucky Derby will be invalidated and Mandaloun will be declared the winner.”

A Kentucky Derby victory would a first for each of Mandaloun’s connections: trainer Brad Cox, jockey Florent Geroux and owner/breeder Juddmonte.

Neither Cox nor Geroux were immediately available for comment Sunday afternoon. Cox, the 2020 Eclipse Award winner for Outstanding Trainer, was bidding May 1 to become the first Louisville, Ky., native to become a Kentucky Derby winner.

A Juddmonte official declined an interview request Sunday but said his organization will follow news as it develops.

“Our position is not to comment for now and we will trust the process as set out by the KY Racing Commission,” Garrett O’Rourke, general manager of Juddmonte USA, said in a text message.

Only twice in Kentucky Derby history has a second-place horse been elevated to the race win.

Forward Pass was promoted to the 1968 Kentucky Derby win after Dancer’s Image failed a post-race drug test. Country House was then elevated to the 2019 win after stewards ruled Maximum Security interfered with other runners.

The Louisiana Derby effort contributed to Mandaloun going off in the Kentucky Derby at 27-1 odds. The colt outran his price on the first Saturday in May.

The two runners engaged in a stretch duel, with Hot Rod Charlie and Mandaloun’s stablemate Essential Quality also involved directly to their outside. Medina Spirit hung tough for the win, with Mandaloun hitting the wire a half-length clear of third-place Hot Rod Charlie.

“He ran huge,” Cox said after the Derby. “We just came up a little short.”

Connections decided this week not to send Mandaloun to Pimlico for the Triple Crown’s second leg. Cox said Thursday on a National Thoroughbred Racing Association teleconference that running on a two-week turnaround would not be in the colt’s best interests going forward for the rest of the year.

“We made the decision to bypass the Preakness and point for Grade 1s throughout the rest of the season in hopes of making him a Grade 1 winner at 3,” Cox said.

Mandaloun may now become not just a Grade 1 winner, but the 147th Kentucky Derby winner.