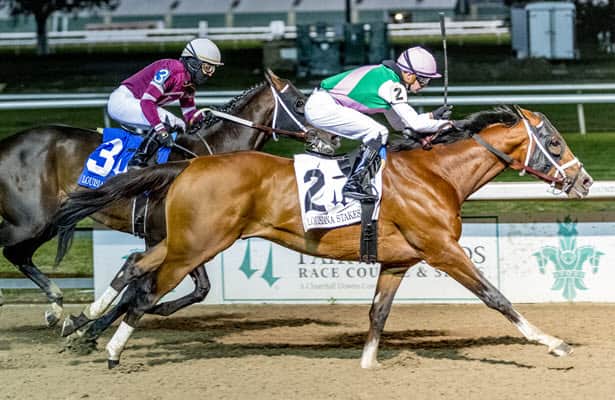 Odds-on favorite Mandaloun and Florent Geroux reeled in a loose-on-the-lead Midnight Bourbon in mid-stretch to win the Grade 3, $150,000 Louisiana Stakes at Fair Grounds on Saturday.

#Mandaloun returns a winner in the Louisiana Stakes (G3) with @flothejock aboard for @bradcoxracing and @JuddmonteFarms.

This was the sixth time in the past 53 weeks Mandaloun and Midnight Bourbon have squared-off. Mandaloun has gotten the better of his rival in four of those six matchups with last being in the Haskell (G1) last July.

Mandaloun and Midnight Bourbon were both making their 4-year-old debuts as a potential prep for next month's $20 million Saudi Cup.

This story will be updated.