Mandaloun, Olympiad lead a field of 7 in the Stephen Foster 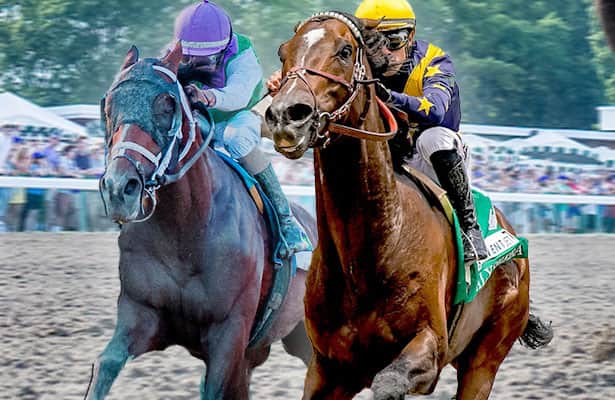 The 1 1/8-mile Stephen Foster is a Breeders’ Cup “Win and You’re In” event toward the $6 million Classic held at Keeneland on Saturday, Nov. 5. The winner of the Stephen Foster will receive their entry fees paid to the Classic along with a travel stipend if they are located outside the state of Kentucky.

In the Stephen Foster, Juddmonte’s Mandaloun, who won last year’s Derby following the disqualification of Medina Spirit, finished ninth in the $20 million Saudi Cup (G1) in his last start. Following the Saudi Cup, Mandaloun was delayed in his return to the U.S. but has been steadily working at Churchill Downs since May 8.

“He’s been doing great training over this track so it makes sense to target a race like the Foster that is at home,” trainer Brad Cox said. “We kept our options open but this race you don’t have to ship and can run out of your own stall.”

Since the race debuted in 1982, there have been no winners of both the Kentucky Derby and Stephen Foster.

Jockey Florent Geroux will be back aboard Mandaloun, who drew post No. 6.

Grandview Equine, Cheyenne Stable and LNJ Foxwoods’ Olympiad will return to Churchill Downs for the Foster where he last won the $500,000 Alysheba (G2) by 2 1/2 lengths over Happy Saver and Title Ready on Kentucky Oaks Day.

Olympiad returned to Hall of Fame trainer Bill Mott’s Saratoga base following the Alysheba and has been training in upstate New York. The bay son of Speightstown is undefeated as a 4-year-old with open-length wins in the $500,000 New Orleans Classic (G2) and $250,000 Mineshaft Stakes (G3). He arrived at Churchill Downs early Tuesday morning.

“We thought he was a nice horse since he was a 2-year-old,” Mott said. “He missed a lot of time in his 3-year-old year unfortunately. The patience that we were allowed to have with him and waited until he got right paid off. He’s a really good horse and competing at a top level.”

Olympiad will be ridden by Junior Alvarado from post 3. Alvarado has ridden Olympiad in seven of nine lifetime starts.

Another top older horse that was entered in the Stephen Foster is $1 million Oaklawn Handicap (G2) winner Last Samurai. Owned by Willis Horton, Last Samurai will compete under Hall of Fame trainer D. Wayne Lukas’ name for the first time after being transferred from Dallas Stewart following the 1 1/8-mile race on April 23.

Last Samurai has won four of 15 starts and, along with his four-length win in the Oaklawn Handicap, sports a stakes win in the $150,000 Poinsettia at Oaklawn. Veteran rider Jon Court has the mount from post 7.

CHC Inc and WinStar Farm’s Grade 1 winner Americanrevolution will attempt to avenge his fourth-place effort in last month’s $200,000 Blame in the Stephen Foster. The New York-bred Americanrevolution won last year’s $750,000 Cigar Mile (G1) as a 3-year-old. The Blame was Americanrevolution’s first start of his 4-year-old campaign. The Todd Pletcher trainee will be ridden by Luis Saez from post 2.