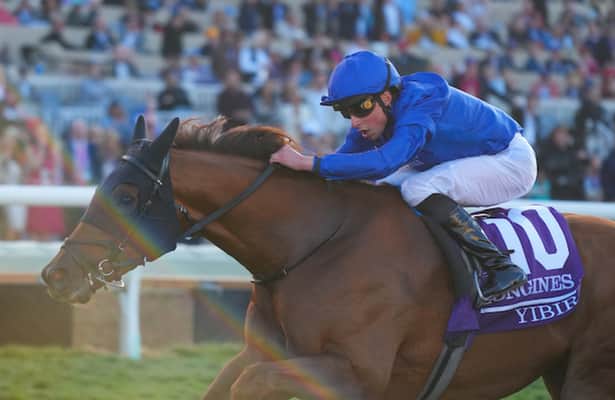 The racing weekend that falls between the 2022 Kentucky Derby and Preakness Stakes features a reigning Eclipse Award winner making his return to the U.S.

The Man o' War is one of five graded stakes on Saturday’s Belmont card. Among the other four is the $200,000 Peter Pan Stakes (G3), a local prep for the Belmont Stakes on June 11.

Yibir’s start will be his third on U.S. soil. The Dubawi gelding beat fellow 3-year-olds last September at Belmont in the Jockey Club Derby Invitational Stakes, then went to Del Mar in November and won the Breeders’ Cup Turf.

Off the strength of the latter victory, Yibir was awarded the 2021 Eclipse Award for champion turf male.

Yibir has finished second in both his starts as a 4-year-old, including the Jockey Club Stakes (G2) last out at Newmarket on April 29. Charlie Appleby trains the Godolphin homebred, who will have jockey five-time Breeders’ Cup-winning jockey William Buick up.

Gufo (7-5) finished as a runner-up in this event last year for trainer Christophe Clement before earning Grade 1 glory three starts later at Saratoga in August’s Sword Dancer Stakes. He made his first start of 2022 on April 2, winning the Pan American Stakes (G2) at Gulfstream Park.

Abaan (9-2) was second in the Pan American for trainer Todd Pletcher, two races after winning the W.L. McKnight Stakes (G3) in January at Gulfstream. Trainer Graham Motion enters the duo of Easter (10-1) and Highland Chief (20-1), both of whom seek their first North American wins.

Here is a look at the field for the 2022 Man o’ War Stakes (trainer and jockey in parentheses) with morning-line odds:

TimeformUS’ pace projections show long shot So High going out to the lead under jockey Luis Rodriguez Castro. Favorite Yibir is expected to settle at the rear of the field through the early going.

Here is a look at other graded stakes taking place Saturday across the U.S. All post times are EDT.

Chateau (5-2), runner-up in the 2021 Runhappy, aims to do one better Saturday for trainer Rob Atras. Jockey Kendrick Carmouche will pilot the 7-year-old Flat Out gelding, a Grade 3 winner. David Duggan trains Drafted (3-1), winner of Aqueduct’s Toboggan Handicap (G3) two starts back in February before finishing fifth there April 9 in the Carter Handicap (G1). Repo Rocks (3-1) aims to make the grade off an April 28 allowance win at Belmont for trainer Gregory DiPrima.

Rougir (1-1) won the Prix de l'Opera Longines (G1) last October at Longchamp before finishing seventh Nov. 6 at Del Mar in the Breeders’ Cup Filly & Mare Turf. The 4-year-old Territories filly has moved from the barn of trainer Cedric Rossi to that of Brown and will have Prat aboard. Brown also trains Lemista (5-2), a Group 2 winner who makes her first start since finishing third Aug. 14 at Arlington in the Beverly D. Stakes (G1). Plum Ali (6-1), a Grade 2 heroine, won the Plenty of Grace Stakes on April 16 at Aqueduct for trainer Christophe Clement.

Queen Goddess (6-5) won Santa Anita’s American Oaks (G1) three starts back in December and the Santa Ana Stakes (G3) there last out March 26. Trainer Michael McCarthy will give a leg up to jockey Victor Espinoza on the 4-year-old Empire Maker filly. Leonard Powell trains defending Santa Barbara victor Neige Blanche (9-5), who was third in the Santa Ana. Carpe Vinum (7-2) has not won since July 2020 and exits a second-place finish in a local allowance race for trainer Phil D’Amato.