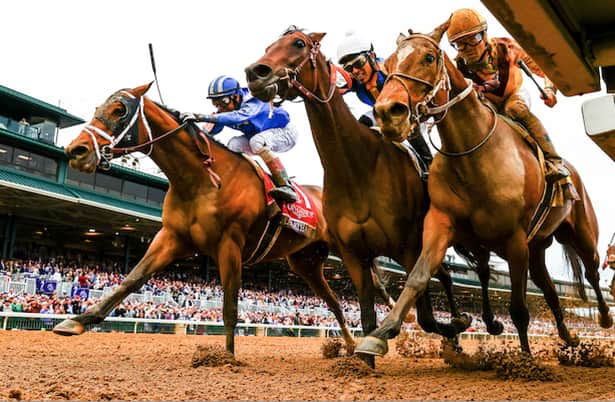 If Malathaat (5-2) was going to win the $2 million Breeders’ Cup Distaff, she was supposed to be in a close race to the very end. And that was exactly what happened.

What was surprising, though, was who she had to nose out at the wire. No, it was not her stablemate Nest (7-5).

Instead, it was South America-bred Blue Stripe (24-1) who lost the bob of the head to Malathaat in the best race so far these two days at Keeneland. Clairière (6-1) was right there in the photo, too, finishing another nose back in third. Slow out of the gate and wide throughout, Nest wound up another 3 1/4 lengths behind in fourth.

The victorious ownership team at Shadwell Stable and trainer Todd Pletcher endured a nervous wait for the finish-line photo to be evaluated and the results to be posted. When it was confirmed that jockey John Velázquez successfully made up six places and 7 1/2 lengths to get Malathaat’s nose in front when it counted, they must have let out a collective whew.

“She can be a little tricky,” Pletcher said. “She needs a little while to get revved up, and you can’t take the lead too soon with her. But I told Johnny that was timing it a little too close for my liking.”

Making up ground until the very last stride, Malathaat edged up on the right shoulder of Blue Stripe, who herself was on the right shoulder of rail-hugging Clairière. Three-eighths of a mile earlier, they all were out of the money and chasing mid-race pacesetter Secret Oath (14-1), the Kentucky Oaks winner who eventually faded to fifth in the eight-horse field.

“I could see she had a head of steam built up, and she was motoring down the middle of the track,” Pletcher said. “I was just hoping she had enough time to get there.”

Pletcher’s joy in adding his third Distaff victory was offset by the tortured feelings that must have engulfed team Blue Stripe.

“It’s always disappointing,” trainer Marcelo Polanco said of losing the photo. “But look at the board. She was 25-1. Nobody believed in her. We believed in her. … She did what she was supposed to do. She ran her ass all the way to the finish line, so I’m very proud of the filly.”

A Grade 1 winner in Argentina, Blue Stripe was moved to California last summer. Since she finished seventh in last year’s Distaff, the 5-year-old Equal Stripes mare won the Santa Margarita (G2), finished second in the Santa Maria (G2) and won the Clement L. Hirsch (G1). Then she got a three-month break before Saturday.

A two-time Grade 1 winner for Stonestreet Stables and trainer Steve Asmussen, Clairière also was returning from time off. She last raced Aug. 27, when she threw a fit at the gate before finishing fifth in the Personal Ensign (G1) at Saratoga.

“It looked like the outside horse got me at the last point,” her jockey Joel Rosario said Saturday. “(The close finish) just kind of made it a little bit tired for my filly there, but she ran a big race.”

As for Nest, she still is likely to be crowned the top 3-year-old female of 2022. Her two Grade 1 wins and her runner-up against the boys in the Preakness will not be taken away. On Saturday it was a case of whatever could go wrong did go wrong.

“Nothing worked out well for Nest today,” Pletcher said. “She didn’t jump well at the start. She was spinning her wheels around the first turn, and she was very wide all the way around. … I was concerned when they hit the first turn that it wasn’t going her way today.”

“All credit to the top three,” said Aron Wellman, co-owner of Nest. “That was an incredible race, and I think we probably had to do more dirty work than we would have liked. Hard to see her finish off the board for the first time here, but you can’t be anything but proud of her.”

Now a five-time Grade 1 winner and an Eclipse Award recipient last year, Malathaat added $1.04 million in first-place money to bring her career earnings to $3,790,825. As a 4-year-old Curlin filly out of the A.P. Indy mare Dreaming of Julia, a breeding career appears to be on deck.

“Wouldn’t it be lovely if she stayed in training?” asked Gregory Clarke, co-farm manager for Shadwell. “(Pletcher would) love that. But what she’s accomplished is just incredible. We’re so blessed. We’ve gotten this far with her. But she’s at the top of her game. We’ll see what Sheikha Hissa and the family want to do. … She’s going to be an incredible broodmare, there’s no question.”

If that comes sooner rather than later, then we know Malathaat went out with a highlight-reel finish for the ages.