Malathaat and Clairiere will renew rivalry in 4-horse Shuvee 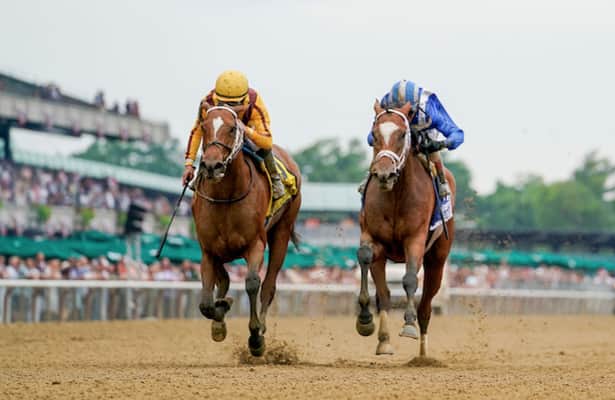 Stonestreet Stables’ Clairiere and Shadwell Stable’s Malathaat will square off for the sixth time in Sunday’s Grade 2, $200,000 Shuvee, a nine-furlong test for older fillies and mares at Saratoga Race Course.

Malathaat, trained by Hall of Famer Todd Pletcher, bested Clairiere in each of their first four meetings, taking the Kentucky Oaks in May 2021 at Churchill Downs, and the Alabama (G1) in August at the Spa en route to Eclipse Award-honors as champion 3-year-old filly.

Malathaat also finished one place in front of Clairiere when second in the Coaching Club American Oaks (G1) last July at Saratoga and when third in the Breeders’ Cup Distaff in November at Del Mar.

But on Belmont Stakes Day, Clairiere, trained by Hall of Famer Steve Asmussen, finally got the better of her familiar foe, rallying from 14 lengths off a sharp, pressured pace set by Letruska to post a head score over Malathaat in the 1 1/16-miles Ogden Phipps (G1).

Asmussen, the winningest conditioner in North American history, said the result was one of the most gratifying of his storied career.

“It was a huge win for her to finally come out on the right end of Malathaat, a mare that I have the greatest respect for and last year's deserving 3-year-old champion filly,” Asmussen said. “We always believed that Clairiere could get it done and last time out she did and that meant a lot to all of us.”

Asmussen said Clairiere, who sports a record of 13: 5-4-2 for purse earnings in excess of $1.7 million, has thrived since arriving at Saratoga, breezing a half-mile in 48.96 seconds over the Oklahoma training track Sunday.

“She loved it up here last summer and we were anxious to get her back up here again,” Asmussen said. “She's settled in beautifully and she's just all class. She's enjoying the cool mornings and has trained very impressively since she's been here. We're pleased with how Clairiere is doing and we expect a huge run from her on Sunday.”

Clairiere and Malathaat, who were both bred by Stonestreet Thoroughbred Holdings, boast royal pedigrees with both being daughters of Curlin and out of Grade 1-winning mares.

Malathaat, a $1,050,000 Keeneland September Yearling Sale Purchase, is out of 2012 Grade 1 Frizette-winner Dreaming of Julia, who was also trained by Pletcher.

Clairiere, a homebred, is out of three-time Grade 1-winner Cavorting, who banked more than $2 million through a record of 13-8-1-1 for conditioner Kiaran McLaughlin.

“Clairiere is racing royalty,” said Asmussen regarding the filly's impressive pedigree. “For her to continue to compete at this level - that was her second Grade 1 - that's just as good as it gets. For somebody who grew up in racing and has been extremely fortunate, I realize how blessed I am to have this opportunity.”

Asmussen said he is cautiously optimistic entering Sunday’s test on the back of Clairiere’s big win over Malathaat with both competitors on a path towards the Grade 1 Breeders’ Cup Distaff in November at Keeneland.

“That's what I love about horse racing. The last race is an indication of what you're capable of, but it will not give you a head start on the next one. You have to do it again,” Asmussen said. “Malathaat beat her twice here last year and I expect to have two more runs against her here this year with the ultimate goal being the Breeders’ Cup Distaff. We're at a very good level right now but we'll keep our eye on the prize, and that's year-end honors.”

Asmussen was the conditioner of Hall of Famer Rachel Alexandra, who bested the boys in the 2009 Grade 1 Woodward to the delight of a packed house at the Spa en route to Horse of the Year honors. He said he can appreciate how racing fans become so supportive of certain stars, including both Clairiere and Malathaat.

“I can thoroughly understand becoming attached to them. Their qualities are extremely admirable and the way they go about their racing is impressive,” Asmussen said. “I've always thought it's amazing how a horse's accomplishments can make you feel good about yourself. We're just along for the ride.”

Clairiere will leave the outermost post 4 under Joel Rosario.

While Asmussen has yet to record a Shuvee win, Pletcher is just one shy of the record five wins held by Hall of Famer H. Allen Jerkens. Pletcher's Shuvee starlets include Awesome Maria [2011], Authenticity [2013], Stopchargingmaria [2015] and Curalina [2016].

“Anytime you do anything that is associated with something that Mr. Jerkens accomplished, it would be a true honor,” Pletcher said. “He was a special man, someone who I got to know a little bit and someone I would seek advice from and just enjoyed talking with. He had such a tremendous passion for the business.”

Malathaat will look to improve on her impressive career ledger of 10: 7-2-1 worth purse earnings in excess of $2 million. She has never lost back-to-back races and Pletcher has trained the filly in blinkers leading into Sunday’s test, equipment she will sport for the first time on race day.

Malathaat breezed a half-mile in 49.22 seconds on July 17 over the Spa main track with Velazquez up, while working in company for Sunday’s showdown.

“We’ve thought about putting blinkers on her for a long time and it was hard to do last year because she was in the midst of such a good season,” Pletcher said. “We’ve felt like in both starts this year she kind of lost focus at a certain stage of the race, so we decided to breeze her in blinkers and felt we got the desired effect that we were looking for.”

Malathaat launched her 4-year-old campaign with a three-quarter length win in the Grade 3 Doubledogdare in April at Keeneland ahead of her runner-up effort in the Ogden Phipps. She will exit post 3 under Hall of Famer John Velazquez.

Phoenix Thoroughbred III’s Crazy Beautiful sports a ledger of 7-5-1 for purse earnings in excess of $1 million for conditioner Kenny McPeek.

Crazy Beautiful has ventured to 10 racetracks through 18 starts, posting wins at six of them. Her lone start at Saratoga resulted in a distant sixth in last year’s Grade 1 Alabama.

Out of the graded-stakes placed Indian Charlie mare Indian Burn, Crazy Beautiful enters from a closing second to Army Wife in the nine-furlong Lady Jacqueline on June 25 at Thistledown.

“Crazy Beautiful has been an overachiever – she’s accomplished a lot,” McPeek said. “She’s doing exceptionally well here and she’s going to need to find another level to beat Malathaat and Clairiere. Even if she is third or better, I think it’s going to be worth the try.”

Crazy Beautiful worked a half-mile in 48.66 on July 16 over the Oklahoma dirt training track.

“It was probably as nice of a work as she’s ever put in last weekend, so I see her running really well and she’s going to give it her all,” McPeek said. “Is she up to the level of the fillies that are running? She’s going to have to prove something.”

Rounding out the compact field is Louis Lazzinnaro’s graded-stakes placed Exotic West, who enters from a distant second in the Grade 2 Allaire DuPont Distaff on May 20 at Pimlico – a race won by 14 1/4-lengths by Super Quick.

Trained by Gary Sciacca, the 4-year-old Hard Spun mare was claimed for $40,000 out of a winning effort going nine furlongs over a good and sealed Saratoga main track in August. She has since posted a record of 9-3-3-1 for current connections led by a score in the nine-furlong Top Flight Invitational in April at the Big A.

Sciacca said Exotic West, bred in Kentucky by Gary and Mary West Stables, is training well and should benefit from her two-month break between starts with the ultimate goal being the Grade 1, $600,000 Personal Ensign on August 27 at the Spa.

“That horse that beat her at Pimlico opened up like a freak. She ran her race though and she's doing well,” Sciacca said. “We kicked her out a little bit and she looks fantastic. This is a stepping stone for the Personal Ensign on Travers Day. It's tough but it's a small field.

“Louis said let's take a shot,” Sciacca added. “She's been great to us and she likes running fresh. If it comes up muddy, she loves the mud.”

Hall of Famer Javier Castellano retains the mount from the inside post.