Maker's fully loaded for a W.L. McKnight four-peat at Gulfstream 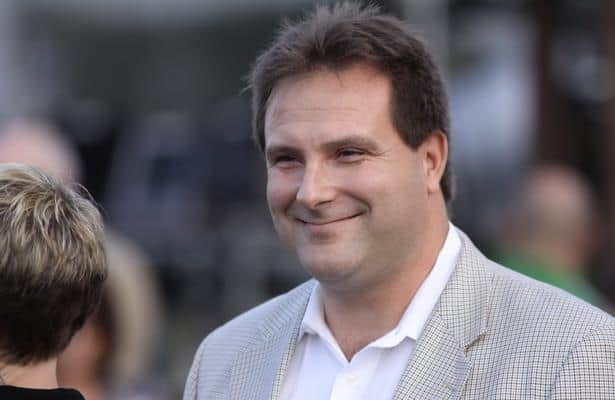 In a quest to win the Grade 3, $200,000 W.L. McKnight for an unprecedented fourth consecutive year, trainer Michael Maker is sending out one-third of the field Saturday at Gulfstream Park in the 1 1/2-mile turf event.

Apreciado, Carom, Cross Border and Temple all vie for a chance to join past McKnight winners Taghleeb (2017), Oscar Nominated (2018) and Zulu Alpha (2019), all from the Maker barn. While other trainers have won the McKnight in non-consecutive runnings and a few -- Todd Pletcher, Tom Albertrani and Mary Hartmann -- have won back-to-back editions, Maker is the only trainer to win three consecutive years. “To be honest I didn’t even think about it, but winning any race is nice so this would be four times as nice,” said Maker, the winner of more than 2,400 career races. His contingent this year will face eight others on Saturday when a dozen line up in the gate for the 10th race on the Gulfstream Park card. It's also the final event before the two featured Pegasus World Cup Invitational Series races, in which Maker also has his shots. Apreciado, to be ridden by Paco Lopez from post 3, will be facing graded stakes company for the first time in his career. The 6-year-old gelding by Skipshot was claimed last February by owners Justice Racing Stable LLC. Following an eighth-place finish in his first race under Maker, Apreciado has since hit the exacta in six out of his last seven starts. “We probably ran him back a little too quick, but that’s when that race came up," Maker said. "We took a shot. But he’s a very attractive horse. We kind of gave him a little more time between races, recently.” Javier Castellano will ride Carom from post No. 4 for owners Paradise Farms and Mad Dog Racing Stable. Claimed by the group last October at Belmont Park for $50,000, the gelded son of Data Link won first after the claim for Maker on the turf at Gulfstream Park on Dec. 1. Maker said he would let the Hall of Famer Castellano decide the best course of action for Carom on Saturday. Cross Border, who drew post No. 7, has been in the Maker barn since June and won three consecutive starts at Saratoga last summer. Jose Ortiz won aboard the son of English Channel two back in an allowance race at Aqueduct in November and has the mount again on Saturday. Maker wants to see Three Diamonds Farm’s Cross Border do what he does best. “He has to target something to keep his mind busy -- that’s his best chance," the trainer said. "If he’s pressing the lead, he wants to keep the leader in his sight. He likes to win." Irad Ortiz Jr. has the mount on Temple from post No. 10. He's running for the same ownership group of Carom. A 4-year-old gelding by Temple City, he won the Gio Ponti Stakes going nine furlongs on the grass for Maker two back at Aqueduct at the end of November. Maker would like to see Temple run in a similar manner in the McKnight. “I think on the stretch out Temple is going to be forwardly-placed. I think his better races have come contesting the pace,” Maker said.

*Rating is based on HRN fan votes, which rank the Top Active Horses in training.
Following the McKnight, Maker will saddle Zulu Alpha and Henley’s Joy in the Pegasus World Cup Turf Invitational (G1). He knew this would be the landing spot for 2019 McKnight winner Zulu Alpha following the 7-year-old Street Cry gelding’s performance in last year’s Breeders’ Cup Turf. “We had this race in the back of our minds after the Breeders’ Cup since he ran so well and didn’t have the greatest trip. He had a little bit of freshening after that and it seemed to do him well,” Maker said. Zulu Alpha has won two of his three career starts on the grass at Gulfstream Park. Tyler Gaffalione is scheduled to ride the nine-time winner and earner of $1,371,674 for owner Michael Hui. Julien Leparoux gets the mount on Henley’s Joy. A longshot at 30-1 on the morning line, the 4-year-old by Kitten’s Joy finished eighth in his most previous race, the Hollywood Derby (G1) at Del Mar in November. “Last race, he had a soft turf course, which he isn’t very fond of," Maker said. "But we were out there and we didn’t have much choice. Hopefully we stay firm on Saturday."
W. L. McKnight Handicap W. L. McKnight Handicap (2020)