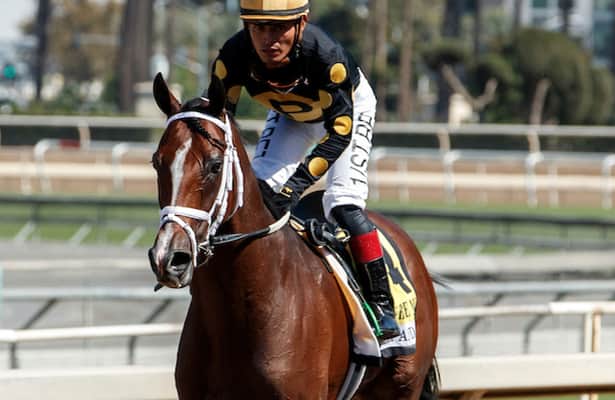 Already with a handful of prospects for next month’s $1 million Pegasus World Cup Turf Invitational (G1), a race he won in 2020, trainer Mike Maker could wind up strengthening his hand after Saturday’s $200,000 Fort Lauderdale (G2) at Gulfstream Park.

Since the Pegasus Turf debuted in 2019, four of its runners have come from the Fort Lauderdale, including winners Largent, second by a neck to stablemate Colonel Liam in January, and Instilled Regard, third to Maker-trained Zulu Alpha in 2020. In defense of his title, Maker ran third with 14-1 long shot Cross Border in 2021, beaten two necks.

Maker will send out two of the seven horses he nominated to the Fort Lauderdale, Atone and Media Blitz, as well as supplemental entry Order and Law. Three Diamonds Farm’s Atone is a 4-year-old Into Mischief gelding with four wins in nine career tries on grass, two of them coming in his last three starts, most recently a 2 1/2-length optional claiming allowance triumph Nov. 21 at Aqueduct.

Media Blitz will be making his first start since Maker spent $100,000 to claim the 4-year-old Medaglia d’Oro colt for himself out of a third-place finish Nov. 26 at Del Mar. He has faced graded company twice previously this year, finishing off the board in the Del Mar Handicap (G2) and John Henry Turf Championship (G2).

“Nice horse. I think he probably wants to go a little further than a mile and an eighth, but it’s a good place to start with him,” said Maker’s assistant trainer, Nolan Ramsey. “He’d been running some good races and keeping some pretty good company, too. He’s just a horse we thought would want to stretch out and it’s kind of our niche, so we took a shot.”

Media Blitz has two wins and two seconds in four tries at 1 1/8 miles, with his other victory coming in a 1 1/2-mile allowance May 20 at Churchill Downs. He breezed an easy half-mile in 50.14 seconds Dec. 11 on Gulfstream’s main track following his cross-country trip.

“We had him for a little bit out there before he shipped back. We got a work into him the other day and I was real happy with him. He seems to handle everything good,” Ramsey said. “Very classy. Does everything you want him to do. I think he can run all day long.”

Order and Law also was claimed at Del Mar, this time for $80,000 on behalf of Paradise Farms Corp. The 5-year-old gelding – whose grandsire, Shakespeare, was a multiple Grade 1 winner on turf – ran fifth in the Oct. 2 City of Hope Mile (G2) in his first start for Maker. He rebounded to finish second by a neck at odds of 10-1 behind favored Neptune’s Storm in the one-mile Lure, also at Santa Anita.

“He was a little overmatched the first time we ran him,” Ramsey said. “We didn’t have him that long, but the addition of blinkers into the (Lure) made a world of difference. He’s a completely different horse. I think he wants to stretch out and, hopefully, be a nice marathon horse for us down the road.”

Grade 2 winners Cross Border and Field Pass are Maker horses also under Pegasus Turf consideration, along with Flavius, recently sent to Maker after being purchased for $230,000 at Keeneland’s November sale.

“Obviously, (being a Pegasus Turf prep) plays a big part. There’s a couple (horses) that, had we not been pointing toward the Pegasus, we probably would have run here, so we’re going to bring a couple into the Pegasus fresh,” Ramsey said. “We’ll see. This is kind of a deciding factor for a few others. We’ll see how things shake out.”

Allen Stable Inc.’s Doswell ran second in last year’s Fort Lauderdale, beaten two lengths by Largent despite a trip where he was bumped early, raced inside and was forced to steady at the quarter pole. He ran third by 1 1/4 lengths in the 1 1/2-mile W.L. McKnight (G3) Jan. 23 in his other start at last winter’s Championship Meet.

“He ran into all kinds of trouble last year and still ran well,” trainer Barclay Tagg said. “He’s a pretty nice horse, really. He’s had his ups and downs and he’s been a tough horse to keep sound, but he’s doing really well right now.”

Doswell has run third in each of his three starts this year. After the McKnight, he didn’t run again until Oct. 21 at Belmont Park, an optional claiming allowance where Atone ran second.

Doswell was beaten in a similar spot Nov. 19 at Aqueduct by L’Imperator, who returns in the Fort Lauderdale with two-time Grade 3 winner and twice Grade 1-placed stablemate Analyze It.

“He’s just goes out there and does it. He tries every time,” Tagg said. “He’s done everything we’ve asked him to do. He’s coming into the race as good as he did last year. I’m looking forward to it.”

Clipper Logistics’ 5-year-old Space Traveller, both a Group 2 winner in Ireland and Group 3 winner in his native England at 3, will be making his fourth U.S. start this year. The Bated Breath horse has been beaten a total of eight lengths in three domestic Grade 1 races this year, including a second in the Woodbine Mile after being bumped at the start Sept. 18 at Woodbine.

“I don’t think he needs to be too far away, maybe three [or] four lengths,” trainer Brendan Walsh said. “But he does like to get some pace in front of him and come running at them at the end.”

Phipps Stable homebred Breaking the Rules returns for a second straight try in the Fort Lauderdale after finishing third last year prior to a ninth in the Pegasus Turf. The 6-year-old son of War Front, trained by Hall of Famer Shug McGaughey, has raced just three times since the Pegasus, returning to win a Saratoga allowance in August. Most recently he was seventh in the one-mile Artie Schiller Nov. 13, contested over an Aqueduct turf course rated good.

Victoria’s Ranch’s King Guillermo ran second in the 2020 Arkansas Derby (G1) before going to the sidelines and is winless in four subsequent starts, spread out from last December to Oct. 23 at Gulfstream when he was fourth in a one-mile handicap. He broke his maiden on the grass prior to the Pulpit, his only previous tries on turf.

Reeves Thoroughbred Racing and Andie Biancone’s Sole Volante finished off the board in both the 2020 Belmont Stakes and Kentucky Derby, when the Triple Crown race order was switched amid the coronavirus pandemic. He has failed to find the winner’s circle since a June 2020 optional claiming allowance at Gulfstream, 10 days before the Belmont, running sixth in the Oct. 22 Sycamore (G3) at Keeneland last time out.

Completing the field are English Bee, whose three career stakes wins include the 2019 Virginia Derby (G3); Renaisance Frolic, a three-time turf stakes winner at Gulfstream that also ran second in the March 27 Kitten’s Joy Appleton (G3); and the also-eligible Brown Storm, a Group 2 and 3 winner in his native Chile in 2018.